Having been warmed up by the likes of Nick Curly and Sasha at his opening party in the plush Ushuaia Tower, we head over to continue the party at the respected institution that is the We Love party at the legendary Space club. On entering we make our way to the Sunset Terraza, to be greeted by what looks like Harry Potter on a ragga trip and dressed as a harlequin. We are witnessing ‘ The Correspondents’ live. Remember the tune and saying ‘Jungle is Wicked’ ? Well tonight, under the Ibiza airport flight path, it is! Funnily enough they did a re-mix of ‘Jungle Book’s – I wanna be like you’ .One D.J Chucks and on stage ‘Mr Bruce’ is all there is, and the lead man’s throwing huge Jungle shapes that Tarzan would have been proud of, to the sounds of full on dub-step, a twist of swing & D’n’B ,while he M.C’s down the Mic; mental vibes, mental dancing, lot’s of energy and the crowd love it, especially the girls at the very front of the stage all trying to reach out to him. We can’t help but join in the carnage. Stick these guys down as a must see this summer.
After all the dancing we head upstairs to the outside terrace (Premier Etage ) where the iconic and original Ibicenco superstar ‘Alfredo’, is dropping another set of dance music’s history, educating the kids with tunes like ‘Technotronic- Pump up the Jam’ and ‘Raze- Break for love’, all hand picked from his vinyl collection. We then move downstairs to the Space Terraza Arena, presented by nofitstate, for some dark and hypnotic beats from Vitalik, Head Honcho and Space regular, Ryan O’ Gorman. Not really in the mood just yet, we search for something a bit more upbeat and maybe funky? We find just that in the El Salon, presented by Lo Cura. The D.J is playing ‘Michael Jackson- Shake your body down to the ground’ and follows with a set of disco, funk and all things soul. A nice vibe, enough room to chill and to ease those dancing feet while you sip a chilled wine ( €12 a glass). Next up the Discoteca Arena (main room ). We catch a bit of rising star Ben UFO vs Paul Woolford, a quality blend of new and not so older. The former a new resident for the season and the latter a regular favourite, playing b2b covering a range of dance styles from house-garage to techno. One to watch out for. 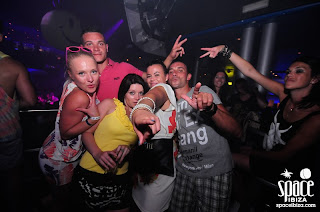 Back to the Space Terraza for a bit of minimal techno from Martyn, but lack of atmosphere takes us back to El Salon, where we feel the funkiness, getting a chat with a few clubbers who most tell us their excited to see Electro pop heroes ‘Hot Chip’ DJ’s :’Felix and Al’. Now personally I can give or take, but I head back to the Discoteca and take position to their left. The guys lack interest or interaction with the rammed dance-floor and play a dull set of techno which doesn’t go anywhere, I’m unimpressed, and looking down I think the crowd feel the same. Back to the Terraza to catch ‘Matthew Jonson vs Minologue’ The 3 – D.J/ producers stand (two facing each other and one in the middle), two armed with lap tops and one with a keyboard. Though again this is all things electronic and minimal, it’s very hypnotic and draws you in. Some huge quality between the two Swede’s ( Minilogue ) and the German ( Jonson ). Back to The Discoteca to see the curator of tonight’s Be Electric party ; one ‘James Zabiela’ I must admit I’m a fan so knew what to expect. If one D.J could be called a showman it’s this man. He’s a Technical Wizard, the Gandalf of Electronic Music, flying around the mixing desk, looping, ipad in the air, rocking his golden locks back and forth to the groove of the tunes, like Thor the superstar D.J. He works the crowd while huge sponge ‘Be Electric’ hands are thrown out into the up for it audience. He takes us up and down like an Alton Towers ride, a visual treat to watch the man in action, quality tunes and an Electric atmosphere. You can see why the ‘We Love’ organizers invite him back.
To end the night, I fancied a bit of up front no nonsense house and melodic techno from Simon Baker vs Geddes and they didn’t disappoint. A great way to bring us down from the banging electronic sounds of Zabiela. We love always works hard to provide an eclectic party of electronica….and the good news is that they continue to succeed. With an excellent multi-room venue, great value ticket price and a location easily accessible from the main resorts, I can highly recommend. To summarize I would like to say….. We Love Space too!
Words by Malcolm Parry

The blog would like to thank Leena Sharma of We Love for all her help.