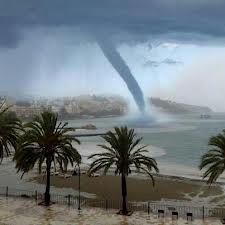 A Tornado which hit Ibiza Saturday evening, was photographed in Figueretes. Other photos across the Island, captured Funnel clouds, early formations of Tornadoes, which occur during supercell thunderstorms. When a Funnel Cloud touches the ground, it is then officially classified as a Tornado. The photograph which appeared on the Facebook page of Marina Ibiza Charter, clearly shows the powerful force of nature touching the surface. To date, the photograph has been shared 770 times across the popular social media platform. Ibiza usually expects thunderstorms around this time of year and the rains are a welcome arrival to the Island, as it had become very dry due to record high temperatures in August, leading to fears of wildfires. A fire did break out on scrubland in San Antonio last month, but it was quickly brought under control.  Discarded cigarette buts are the most common cause of  wildfires in Ibiza. There have been claims that the photograph is Photoshoped but this is debatable, as it was witnessed by many people at the same time.