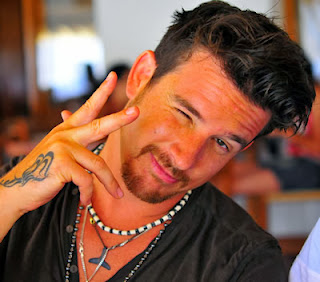 The Spanish word Vagabundo, translates as a person without a home, a hobo, drifter or wanderer of the streets. In Ibiza, the Cadenza Vagabundo party was created by the late and lamented Sam Guetta who in 2008, transformed a niche record label into one of the islands most exciting parties. Born out of DC10, its maestro DJ Luciano was marketed from a cool and underground DJ to a commercial brand name when he joined Pacha in 2010. At that time, many observers were of the opinion that the move to the then commercial club Pacha, would damage Lucianos underground street cred and influence the music he played. However, under the direction of Danny Whittle at Pacha, Luciano became a global artist. All seemed to be going so well for Luciano until this year, when the party made the decision to leave Pacha and go to Booom, most likely influenced by Danny Whittles decision to associate with Giuseppe Ciprianis new club instead. With the stop go status and numerous teething problems at Booom, the party never really got a chance to show what it could do at the club. Down the road at Ushuaia, Lucianos residency was surprisingly failing to attract the numbers and there are doubts if it will return in 2014, as rumours are already circulating that Hardwell will take over his Tuesday slot next summer.

Loyalty is always an admirable quality and with Danny Whittle no longer associated with Booom, it is highly unlikely that Luciano and Cadenza will be there next season. So where will Luciano and Cadenza lay its hat for Ibiza 2014? Like the Defected party, Cadenza will need to find a residency where they can settle and build for a secure future. While the Defected and Cadenza parties easily filled the 1000 person capacity Booom venue with their loyal fan base of support, both parties will have to choose their new homes wisely, as Booom has been a costly misadventure for many. The obvious home for Luciano in Ibiza next summer is Pacha. Combined with the loyal Pacha fan base, the Cadenza party would nicely fill the 3000 capacity club. Steve Hulme and the team at Pacha have done a great job to date with its musical program and it is understood that Pacha would not be adverse to having Luciano back at the club. In September, at the Pacha supported DJ awards, Luciano was a surprise winner of the Tech House accolade. Many industry insiders in Ibiza regarded this as a big pointer to Lucianos plans next summer and felt the Swiss DJ would be foolish to turn down a Pacha return, as it would provide a safe and prestigious base to rebuild.

If Luciano does go to Pacha, a return to a Sunday night slot may be his preferred option. With Solomon almost certain to continue his successful partnership with Pacha next season, it would not be a huge surprise to see the Solomon +1 concept move to another night. With strong rumours suggesting that Elrow will also join the club next year, Pacha will be spoilt for choice and its decision to radically revamp its musical program, vindicated. Add to that the impressive Destino venue and Pacha will have lots to look forward to in the years ahead, as well as safeguarding the future of the islands indigenous musical direction. Also the new musical direction at Pacha is leaning towards a more musically savvy, underground program which should allow Luciano to play the type of sets that made him famous at DC10. While nothing has been confirmed by either Cadenza or Pacha, one thing that is for sure is that Luciano is clearly a talented DJ and still has a lot to offer Ibiza. Lets hope that summer 2014 will witness a more settled tenure for Luciano and the Cadenza Vagabundos team, wherever they decide to go. The blog will update on this story once any relevant news comes to hand.