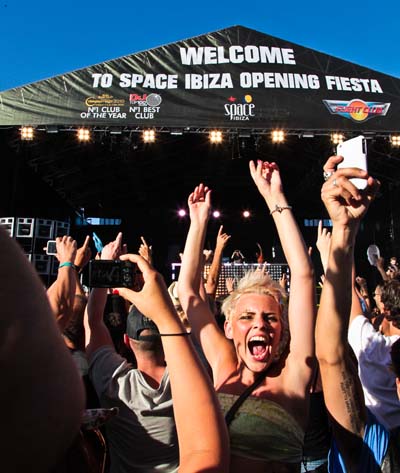 One of Europe’s best parties, the Space Opening Fiesta, will take place in Playa Den Bossa Ibiza, on Sunday the 27th of May 2012. The much anticipated party remains a one day event this year, so it is sure to sell out quickly. In 2011, many people were left Queuing for hours as the club had reached full capacity by midnight. The club stated on their website today, that the 2012 Opening party promises to be the ” Mother of all parties“. The club is expected to announce its full DJ line up in the coming days and the blog will update on any confirmed news. There are expected to be a few surprises to the Space Ticket this season as the club grows it indigenous nights. Kehakuma, which has steadily been making a name for itself, is one of the parties that is tipped to take off in 2012.