We just cant keep our EDM lover, Lorna Murphy, away from Ushuaia this summer and she is back to review the brand new Martin Garrix, Multiply party, at the trendy daytime venue on Bossa Beach. This one tickled our interest on the Blog, so with pen and paper in hand, we sent Lorna to Ushuaia to review the party. Here is her report; ……..As he sits cross legged on the floor of the stage behind the DJ booth, Martin Garrix appears calm, smiling and joking with members of his team, as he gets ready to take centre stage at the fifth night of his inaugural Ibiza residency at Ushuaia.  A weekly party at the beachside venue is just another string on the bow of this young artist, since he exploded onto the electronic scene with his iconic track ‘Animals’. Its an impressive feat for one so young, to step out onto the Ushuaia stage for an Ibiza residency at only 19 years of age. 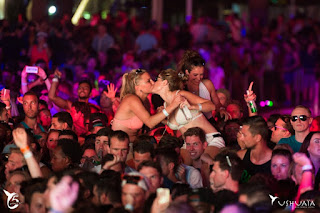 Ushuaia head honcho, Yann Pissenem, floats around backstage surveying the capacity crowd that has gathered, waiting patiently for Garrix to perform. The Garrix/Heldens ‘Multiply’ concept, is Ushuaia’s only new introduction to the 2015 roster. These young Dutch producers join a list of industry heavyweights, such as Avicii, Hardwell, David Guetta and Axwell /\ Ingrosso, all returning for another season at Ushuaia, where they have most certainly cornered the popular “EDM” market on the island. I use the term “EDM” grudgingly, as it is not one that I particularly like, as it seems to increasingly draw negative and derogatory remarks from many sources. At the end of the day it’s all music, right? This night was very much a close knit affair with support from Matisse & Sadko, Jay Hardway and Oliver Heldens, who all stem from the same management/PR family. 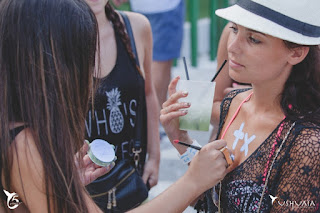 Garrix opened his set on the stroke of 10pm with ‘Dragon’, a collaboration between himself and Matisse & Sadko, which has proven very popular among other DJ’s in recent months and it’s a track that I absolutely love! Out on Spinning Records have a listen. Shortly after, Garrix was joined on stage by one of his good friends Dimitri Vegas, interacting with the crowd and laughing like old friends. There is no doubt that Dimitri Vegas and Like Mike are big supporters of the young artist and it is not uncommon to see both parties present at each other performances. Martin’s energy is truly infectious and you can’t help but be swept along on this epic musical roller coaster as he drops track after track of original material (Virus, Proxy, Gold Skies, Don’t Look Down, Forbidden Voices, Tremor and of course, the big one, Animals). Later in the evening Garrix was joined by producers Matisse & Sadko as he played out their collaboration Break Through The Silence before finishing his set with his monster collab with Dimitri Vegas & Like Mike ‘Tremor’. Industry commentators are predicting that the young Dutch producer will take the top spot from Hardwell in this year’s controversial DJ Mag Top 100 DJ poll. It wouldn’t surprise me one bit if Garrix ranked even higher on the poll this year, he is riding the crest of a wave, his productions this season have been astounding and his performances globally have been impressive. Come October, watch this space!