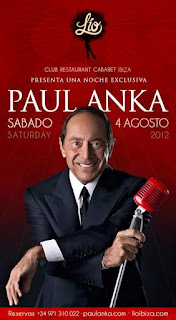 The legend that is Paul Anka, is to make an appearance on the Island of Ibiza on August 4th, at the upmarket venue of Lio, which is located on the old Il Divino site in Ibiza town. Canadian born Anka, was an American teen idol in the late 50’s after his first single Diana, recorded at the age of sixteen, shot to NO1 in the Billboard Charts providing him with instant fame. He went on to tour with Buddy Holly and his boyish good looks and celebrity status landed him a number of acting roles in Hollywood. He was also a talented musician and song writer, penning songs such as My Way for Frank Sinattra and She’s A Lady for Tom Jones. He also co wrote This Is It with Micheal Jackson. One of the first stars to appear on the infamous Las Vegas Casino circuit in the 60’s, his voice and professionalism set him apart from fellow crooners of that time. Paul Anka who is now 71, represents an era where artists did it their way, rather than the producer driven and controlled charts of today. His appearance at Lio, on Saturday August 4th, is sure to attract a large crowd to witness a true legend of the industry perform with a style that belongs to a Golden era of influential artists and musicians.