Ibiza Stands At A Crossroads.

No strangers to controversy, the Matutes Group, the most powerful and influential family in Ibiza, have recently unveiled plans to develop nearly 200 acres of land in Playa Den Bossa. The proposed, €300 million development, is set to anger many environmentalists and business people on the Island and reflects a further erosion of democratic, due process, in Europe. What is sure to be a politically dangerous and potentially inflammatory situation, the development is being fast tracked through the planning process and many environmentalists claim that regulations and laws are being changed to facilitate the 5 star luxury development which has been dubbed “a playground for the rich”. The most contentious part of the plan, is undoubtedly the close proximity of an 18 hole golf course, to the beautiful Natural Park of Ses Salinas, home to many protected species of flora and fauna. It also re-ignites the battle for Ses Salinas, which came under similar threats of development in 1972, 77 and 1990. The battle was won by the environmentalists, when in January 1991, Ses Salinas was declared a protected area by the Balearic Islands Government, but only by a small margin of votes.

The Matutes group claim that the proposed development, which they refer to as the ” Pearl of the Mediterranean” will bring many new jobs and benefits to the Island. They also say it will also increase Tourist revenue and safeguard the future of the Islands tourist economy, which it is highly dependant on. Its an extremely ambitious and risky project and one that will be financed in the whole, by the Matutes Group. While most of Europe wallows in a recession, Ibiza is bucking that trend in a big way. Much of the land will have to be rezoned from agricultural use to business and it will be down to the local council to authorize it. However this plan is sure to attract more senior political attention and already groups are positioning themselves to fight the plan. Small to medium businesses are not happy with a proposed, 55,880 square meter retail park, that they rightly claim, will bring tourists away from the traditional hight street shops, in favour of a more centred and attractive shopping mall.Opponents to the development (which there are many)will see it as a further threat to the natural beauty of the Island and a step too far, in the constant battle to protect natural resources from the over development of Tourism. The Matutes Group and its supporters, will view it as progress and a personal investment for the future economic health of the Island. 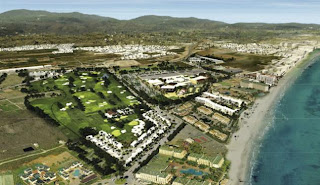 Some in Ibiza will say that the Matutes group own too much, which restricts others from making a reasonable living. If this development was by another company, then it would be viewed differently. But local politics run deep in Ibiza and there are certainly two camps when it comes to the Matutes name. It will be very interesting to see how the new generation of young Ibicencos react to this plan, as its up to them as to what future they want to see for their Island. Previous generations took to the streets in protest against similar developments in the past, its now up to the present one to decide what they want to do. The politicians will be very aware of this fact and tensions have been bubbling under the surface for some time now. A government fell, due to opposition by the people, to a similar development at Cala Hort in 1999. This could be the issue that ignites a change of policy in Ibiza, as popular opinion of the people, takes on powerful institutions. What will happen nobody knows but it is clear what the Matutes Group want to do. There are suspicions that the Golf course may be a red herring to allow the rest of the development to proceed but we will have to wait and see what happens. The blog will run a number of posts on this issue, as key developments arise.