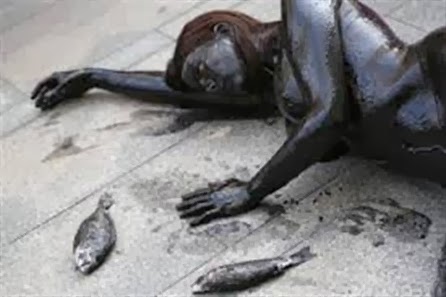 While 99.9% of the island of Ibiza and the millions of people that live there in spirit, abhorrently object to the prospect of any pollution of her beautiful waters, the powerful businessmen in suits, with their well connected friends in Government, look on with gluttonous eyes and greasy minds. For this is a battle, not just for the soul and fragile identity of an island much loved by many, it is a war of Capitalism over Democracy. A crusade that needs noble Knights on white horses to defend against the sly and traitorous deeds, of a weasel like enemy that hides in the shadows of men, tormenting their minds with the sins of corruption. It would be foolish to think of this adversary as weak, for he is not, he is meticulous in planning and weaves his evil from within the corridors of power, where he is trusted and respected. Ibiza is under serious threat and its a real and present danger – make no mistake about it and every able man, woman and child needs to stand up and be counted, if it is to defeat this invading alien to her shores. The ecosystem and natural environment of the waters around Ibiza, is a fragile one and cannot survive an oil spill of even minute pollution, this is why oil drilling in the Gulf Of Valencia has to be stopped or we say a long goodbye, not just to an island, but to our planet. A gallon of oil, pollutes a million gallons of water.

As an Irishman, I have sadly witnessed the corporate muscle and power of energy companies imposing their will on a local community. The Corrib Gas Controversy ravaged a beautiful, natural and rugged coastline, that looked out onto the Atlantic Ocean. It destroyed and divided community, parishes and opinion and continues to leave scars on the land. Heavy handed tactics by police, supported by privately hired henchmen, ensured pitched battles on the roads as the Irish government turned a blind eye. Protesters were sent to Jail and local community sentiment and objection was bought off with jobs and employment in an area that had none previously. It was a nasty piece of work, that the Irish Government allowed to happen, citing exactly the same contractual excuses that the Spanish Government are using now. Since the collapse of the European economy in 2007, a Federal state has started to emerge from Brussels. This bureaucratic unelected state, is powerful and has a strong influence on Governments in Europe – as it holds the economic purse strings. Look what it did to Greece and what it threatened to do to Ireland and Portugal. It is this Federal state and mindset, that now controls European Governments that are in a bailout program, or like Spain, in serious financial difficulties. This is the enemy that is now at the gates of the Mediterranean, waiting to pillage and rape her resources, so that she can pay back the debts she owes.

I have spoken to people in Ibiza, those that arrived on the island at an innocent time, when it was so, so special. They warned me this would happen. They could tell by the way mainland Spain was taking a new interest in Ibiza, that times were changing. People were becoming greedy and materialistic, as cash was flushing through he island with impunity. A nasty and commercial atmosphere was descending on the island – the people were not happy anymore. Everybody was there to make money, to hell with the island and its unique, delicate and fragile soul that made it so special in the first place, as we cant sell that. It is this spirit that Ibiza and her people now stands up to fight for. A Nobel crusade that cannot fail, for if it does, we will loose much of the innocence of our planet, the natural beauty that needs to be protected against the corporate greed and its insidious pollution. The fight needs to be fought intelligently, not just with crowds and mass rallies, they tend not to be as effective as they once were, primarily due to the manipulative spin put out by media outlets controlled by wealthy businessmen, the ones whose ethics and allegiance are fleeting and self serving.

All the Celebrity endorsements will help but it people like Costas Maritimas that will make a difference as its the grounds of the Law and knowing how to work it, will be where the final Helms Deep stand is fought. Sadly we failed in Ireland to prevent our beautiful land being defeated by the big energy companies as we were not organised properly. We were divided and media spin portrayed the protesters as “foreigners and tree hugging hippies”. Poeple were bought off with well paid local jobs within the energy company. We did not stand united. It is now time for the powerful families of Ibiza, to stand up and be counted and defend her shores, for they know who the real players are in this game. We hope that the Corrib Gas template, can help the people of Ibiza defeat the enemy that is now at her gates. Democracy in all its shapes and forms, needs to stand united against the enemy that is Capitalism. For this threat will always be a real and present danger and a torch bearer, that our children and great grandchildren, will have to stand on ready guard to protect.
IBIZA SAYS NO from Jose A. Hervas on Vimeo.