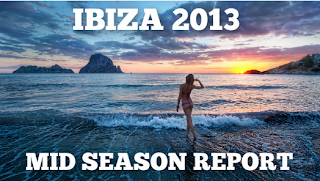 In a season of  major change, like never seen before on the island of Ibiza, promoters, club owners and industry insiders, are all working very hard to keep up with the changing trends on the island. As we reach the mid season mark in Ibiza we take a look at what is going well and what is not. Most people working in Ibiza will admit that it has been a slow start to the season and the unsettled weather has played a part. May and June has not been as warm as usual and due to the increased number of clubs and parties, competition has been keen for the clubbers that have made it to the island. Industry insiders are reporting that holidaymakers are now waiting until they arrive to purchase tickets, or decide what party they will go to. This is in stark contrast to the car rental companies, who say that 70% of their booking are now online and there are fewer people walking in off the street renting cars. Some clubs are now considering reducing their door ticket prices due to the last minute trend that is emerging this year. Young clubbers are now arriving in force for July and August, the two months that sun can be guaranteed and the island is expected to be like a sardine tin for August.

On the musical front the big gamble at Pacha, seems to be paying off as its loyal following continue to support the club. The big surprise at Pacha, has been the runaway success of the Pure Pacha party on Saturday nights. Guy Gerbers Wisdom Of The Glove party has taken its time to find its feet, but clubbers are now starting to warm to the new concept and musically, its fresh and innovative. Guetta is holding his own and Solomun is doing particularly well, as is John Digweed and the exciting Insane party. Flower Power, is proving very popular with its niche crowd but Monday nights are not working out as well. Over at Ushuaia, one of the big shocks of the early season, was the very low turnout for the Luciano Tuesday party. Some big names have been added to the bill in the hope that the party will improve but its probably just a blip rather than a trend. Pete Tongs Grand Bazaar party, is also trying to find its feet but it is lacking the production values of some other parties at Ushuaia. This is in stark contrast to Avicci, who continues to create an electric atmosphere and attract a young up for it crowd to his party on Sundays similar to the Departures party which is also doing very well. David Guetta’s Monday daytime party at Ushuaia, is attracting a great Ibiza crowd and the production quality at Ushuaia this year has been top class. In fact, the atmosphere Guetta creates outdoors, is better than the one inside Pacha. In Ibiza, Guetta is still considered the King and attracts a big celebrity following. Some people are questioning if the daytime party concept in Ibiza has now run its course, as clubbers prefer to stay on the beach during the day. This may be a reason why some of the big names are not attracting the crowds.

At Space, We Love, continues to set the benchmark with hard work and a finger on the pulse of changing musical trends, ensuring a party full of variety and different sounds. Richie Hawtin’s Enter party, has built on its success of last year and it has become the premier minimal techno party on the island. It may need to tweak a few rooms with a different sound but the main man himself is creating a great vibe. Carl Cox, the elder statesman of the house music scene, still commands respect for the quality of his true Balearic party. The Clandestine party, with Felix the Housecat, has created some noise and it may be one to keep an eye on this season at Space. The underground scene in Ibiza is strong and this is where most of the music savvy clubbers are heading to this year. Both DC10 and Sankeys are doing well. While still early in its season, the popular parties at Sankeys are, Viva Warriors, Carnival and Dynamic. At Privilege, the Elrow party, is flying the flag for the prestigious San Rafel club and its across the road neighbour, Amnesia, is reporting good crowds both for the La Troya and Cream parties. The Cocoon party is not going as well as planned this season and the departure of both Richie Hawtin and Marco Carola has made an impact.

In San Antonio the brand new club of Eden has introduced a quality clubbing experience to the popular sunset resort. The Judgement Friday concept is still finding its feet as are a number of other parties. Eden will have to take a fresh look at its music policy for next season but for a club just opened last month, it has made a promising start and looks a valuable addition to San Antonio. It is rumoured that the incumbent DJ management team at Eden will not be there next month. Over the road at Es Paradis, the Hed Kandi party continues to hold its own with a more seasoned crowd and in my opinion, one of the best parties on the island for older clubbers. Another notable change in San Antonio, has been the re-emergence of the West End as a player on the music scene. A young, trendy and fashion concious crowd is starting to replace the old stereotype of falling down drunk, vomiting and football jersey wearing reveller. Local police are now cleaning up the area and free entry clubs such as Hush, The Bassment and Soul City, are attracting the crowds due to their cheap drinks and free entry policy. Ibiza Rocks continues to be the success story of San Antonio and is still pulling in a young crowd for its live music concept.

A noticeable change in Ibiza this year, is the growth of the VIP market. The Matutes group continue to re-develop the Playa Den Bossa resort into a more upmarket product and VIP restaurants like Lio are fully booked out for July and August.The Don Toni hotel, will be refurbished to become the Hard Rock Cafe Hotel and a casino is also mooted for the venue which will be the third Matutes group hotel to be upgraded. Space Ibiza is expected to join the Matutes stable sooner, rather than later. The arrival of Nikki Beach in Santa Eularia has elevated Ibiza to a fashionable destination in the Mediterranean, within the luxury lifestyle market. There is also an increase in the number of cruise ships docking in the new marina area with just a short walk into town. Celebrities are making more and more appearances on the island and while I was there footballers Lionel Messi and Cesc Fabregrass were holidaying in Ibiza. Other notable changes was the decision made by Cafe Del Mar to host a Trance music pre-party for Ferry Corsten at Eden and the no show once again, by Mike and Claire and the Cinemission concept. DJ’s of a certain vintage are clearly reaching their sell by date on the island and many will not be able to command the same fees in 2014 as they become irrelevant and unfashionable to the new names and trends breaking through. There is now a move away from commercial as clubbers seek out deeper, more underground sounds. One thing that is for certain, is that Ibiza is experiencing seismic changes at present both in trends and new innovations. 2013 will go down in the history books, as the dawn of a new era for the small island with a big personality.