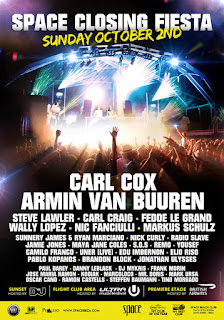 The last push for the finishing line is underway in Ibiza, as clubs and holidaymakers prepare for the final two weeks of the 2011 season. Its been a very busy summer, with many residents on the Island surprised at the increase of sales during a European recession. It is important for the Island Tourism Authorities to recognise the recession proof dance music industry and its appeal to a certain social demographic whose disposable income and spending power is bigger than any other. Ibiza will always be on the Holiday map, as long as it has such a unique attraction that differentiates it from other holiday destinations in Europe. Like them or loath them, the clubs, year after year pull in the crowds, fuelling the local economy and keeping Ibiza relevant and trending.

Not many holiday destinations in Europe can lay claim to a busy few weeks in late September and early October, especially in the Balearics. The Closing parties in clubs such as Space, Amnesia, Pacha, Privilege and DC10 will attract a new wave of clubbing tourist to the Island at a time when most of Ibiza closes down to the traditional family friendly season. Strong sales for closing party tickets are being reported and if intending to travel it is best to buy online before arriving on the Island. Tickets with guestlist entry can be purchased from www.ibizahire.com/tickets/Ibiza-Cheap-Night-Club-Tickets and www.ibiza-spotlight.com/night/tickets_i.htm/?aid=186