Having returned from what was another enjoyable and eyeopening trip to the magical white isle, I am glad to report that the music industry and clubs are in good health again this season. As usual, some parties are performing better than others and there are a handful of newcomers breaking through, which is always reassuring. One thing that is noticeable this year is a shortening of the season for many of the headline DJ names. Its now just a two month season for most of the big names and with so many parties on the island, consolidation into the peak season months of July and August is understandable as the parties that opened mid June were quiet. I expect this to remain a trend for the next 4-5 years at least. Not much change to report from last season and its business as usual for the islands top performers which include Marco Carolo at Amnesia and Carl Cox at Space. Jamie Jones is packing them in at DC 10 which is not helping Hyte and the new party at DC10, Life and Death, is doing quiet well for itself indeed. Other newcomers to note are Do Not Sleep at Vista Club (we don’t like to call it Privilege anymore) and Factory at Heart. Below is  Part I of a club by club guide as to whats happening on the island this season at the Half way stage. Part 2 II will follow tomorrow.

Surprised many by scheduling three techno nights this year, but as I predicted  in April, it was done with the intention of one of them moving away next season. Cocoon is doing well for itself, as can be expected from the master Sven. More room on Monday nights at Amnesia makes for a better party in my opinion. For its first season, Hyte, is doing OK. Its not setting the world alight and its busier when Loco Dice plays, but Jamie Jones owns Wednesdays in Ibiza. This is why I think Hyte will move to Fridays at Amnesia next year, as rumours that Marco Carola is not happy at Amnesia continue to circulate. Music On is the #1 Party on the island so far this summer, as the crowds pack out Amnesia on Friday nights, so credit to Marco for another season at the top. Will he be at Amnesia next year….?? That is far from certain at this early stage, as there is plenty of water to flow under the bridge yet, but with reports of Music On PR’s promoting Jamie Jones Paradise party at DC10 over Hyte, it gives an idea as to the politics at play on the ground. Defected is not finding it easy to fill the Terrace on Tuesday nights and the label needs to book bigger names if it is to have a fighting chance at Amnesia but its doing better than expected. Together is doing well, as is the classic Cream party on Thursday nights. So far so good for Amnesia this season in Ibiza.

Remains the top EDM daytime venue on the island and all its parties are performing strongly. Avicii is still packing them in on Sundays and remains the islands top EDM DJ. Also performing strongly are David Guetta on Mondays and two thirds of the SHM team on Wednesdays have had a few quiet nights. ASOT has built on last years success and more numbers are attending Armin Van Burren on Thursdays this year. In his first season, Martin Garrix, is performing adequately on Fridays, time will tell if this party will grow in popularity. Hardwell is playing second fiddle to his more experienced and talented contemporary, Carl Cox, across the road at Space on Tuesdays. Its good to know some EDM kids have taste in music as Coxy lords it this summer. Ants continues to be one of the best underground parties on the island with a cool, trendy and mixed crowd who know their music in attendance every Saturday. Nothing much has changed at Ushuaia this season and I expect it to perform strongly for years to come with much of same line up in place.

Pacha can be quiet pleased with their music program this season and I feel the club are content with what they have and we will not see much change there for a while. Solomun is attracting the hype but his guests this year, are not working as well as last summer and his sound is becoming predictable. In my opinion he has not built on last years success, but the party is proving popular with the Pacha faithful, especially the all important VIP guests. The surprise at Pacha this year is the popularity of Bob Sinclair and his Paris By Night party on Saturday nights, who is performing just as well as Solomun, albeit with a different clientele. The cheese fest of Aoki and Guetta are doing what they do best and attracting the crowds to Monday and Wednesday nights. Insane is bedding down nicely and the decision to put a House party on Wednesdays as an alternative to Hyte and Paradise, is proving a shrewd move, as Martin Solveig is doing alright. Pacha is serving up  traditional and classic fare with two strong performing in house fun productions, Flower Power and Pure Pacha, alongside some trendy EDM names and a touch of underground with Solomun and Insane. I think they have the mix just right.

Whats happening at Space?…. is a question that everybody is asking and nobody is answering with certainty. Relations between the landord, Matutes Group and the tenant, Pepe Rosello, are far from friendly and rumours that Pepe could go in and bulldoze the building when the lease expires, gives a flavor to the heated emotions on the ground over ownership of the famous club. While the bulldozer rumour does sound extreme, Pepe has had the landord before the local courts over an issue with ownership of the Space carpark – a case that Pepe won. The issue is a serious one between two big players on the island, so not much is being leaked as to the future of Space with tight lips around Ushuaia. Let’s hope it can end in an amicable manner and that Space will continue in its present format. Inside the club, Carl Cox, is having a smashing season and performing as one of the Top 3 most popular parties on the island this year. Enter, while the numbers are down, is still a quality party and will always do well for itself. Glitterbox is a fun night and good reports, along with a few mixed ones, are emanating about it.  Here is a  review we did earlier in the season. Mixed reports also about Luciano and the Cadenza Vagabundos party that replaced We Love on Sundays. One thing that for certain is that Cadenza Vagabundos is no We Love (struggling at Sankeys) and anybody visiting the party expecting a We Love style experience across a number of rooms, will be disappointed. Space have gone and fixed something that was not broken – time will tell if Luciano can deliver a new experience that will replace the iconic We Love at Space. The jury is still out on this one, maybe by the end of the season we will have a better feel for it. 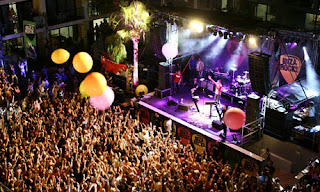 I am happy to report that Ibiza Rocks is in good health in San Antonio and keeping that side of the island relevant when it comes to music. The two gigs I did there this summer, Rudimental and Faithless, were top quality with a cool and trendy young crowd attending and creating a buzzing energy that is unique to San Antonio. It is always a pleasure reporting from Ibiza Rocks as they look after the media so well, and this year they have added table service to one side of the stage which seems to be working nicely and i’m reliably informed that changes have also occurred in the catering and hotel department. A superb sound system and some killer line ups under the stars, has helped build the Ibiza Rocks brand name into a dominant player on the islands music scene, providing an outlet for live music acts. So much so, that Live music is now having an input into the islands musical direction, especially on trends and fashion, and competing alongside the massive electronic output. The future looks bright for Ibiza Rocks and we hope that its success continues, as without it, San Antonio would be a poorer place.