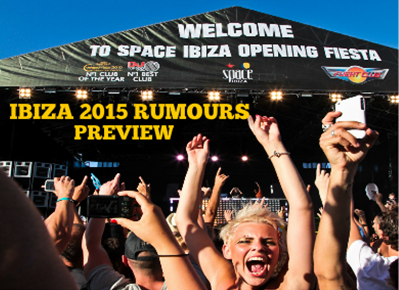 Ibiza 2015 looks set to be a year of consolidation on the island. Most of the super clubs are happy with their current line-ups and apart from a few tweaks, much is expected to remain the same for this season. Four clubs are now emerging as the front runners for next summer and those clubs include Amnesia, Ushuaia, Pacha and Sankeys. DC10 is also expected to perform solidly as it usually does with its limited opening times. Musically, Amnesia is well ahead with some of the islands best parties already in situ and some promising debutantes expected to build on last seasons success. There has been much speculation about the clubs most popular party, Marco Carola’s Music On, after Ushuaia courted the popular Italian DJ who appeared on the cover of their IUmag and played the clubs closing party in October. Last summer rumours were circulating that all was not well with the Carola-Amnesia partnership as the DJ missed a number of gigs at the venue which were put down to an ear infection. This year, the good news for Music On fans, is that Carola is expected to remain at Amnesia and continue his Techno inspired odyssey at the San Rafel club.

An exciting rumour circulating in Ibiza regarding the Amnesia 2015 line up, is the one that suggests Loco Dice will host his own party at the club on Wednesday nights in association with the German based promoter Hyte, which has run a number of successful events in Europe and America. Respected Techno artists such as Ten Walls, Chris Leibing, Ricardo Villalobos and Laurent Garnier are connected to the Hyte series. It’s an exciting rumour if it turns out to be true and one that may not please Sven Vath at Cocoon, as Amnesia would have to promote three Techno parties at the Club. Sven may be keeping his options open for the future if the speculation is correct. Other rumours circulating about Amnesia include one that suggests Dimitri Vegas and Like Mike may be moving from a Sunday night slot to join the Together party on Tuesdays. Their House Of Madness party was a surprise hit on the Amnesia 2014 calender and looks to have a brighter future with Together. At DC10 min tech favorites Tale Of Us are rumoured for a new Friday residency at the iconic underground venue.

At Pacha the departure of its music director Steve Hulme, who was responsible for bringing much of the clubs “new direction” program together will leave the classic club without a full time music director. To date, Pacha have not confirmed any new appointment and it is understood that its events coordinator, Jessica McCarthy, who assisted Hulme over the past 2 years, will preside over the clubs music program for now. If so, she will be the first female to hold such an influential position on the islands clubbing scene. The clubs director, Francisco Ferrer, will also have a big input into its musical management. There is little been said about David Guetta and its a real “nothing to see here please move along” situation at present. While current rumours suggest he will remain at the club, in my opinion its not a given until Guetta himself confirms the Pacha residency for 2015 as the club has some ground to make up with the Frenchman after they released details of his €3.2m salary in November. Steve Aoki is rumoured to moving his Wednesday night party to Monday, replacing the Ibiza Rocks House party (which should have been Manumission) if one half of the old team had agreed to support it, as was originally hoped. Flower Power may also move to another night but much of the schedule is expected to remain the same with Pete Tong rumoured to add a few extra dates at the Club. Solomun while rumored to move to Amnesia, is now expected to remain at the Pacha for 2015 as the Bosnian DJ consolidates his “King in Waiting” position at Pacha.

The one Ibiza club that is expected to make a lot of fresh changes next summer is Sankeys. David Vincent is not known to sit on his laurels especially when opportunity comes knocking and word on the street is that the popular Defected party is heading to Sankeys after a season to forget at the litigious mess that is Booom. All logic would point to Sankeys being Defected’s new home as the Bossa venue offers the best opportunity for stability and prestige as it was Ibiza’s fastest growing club in 2014. However, Magna Carta have recently confirmed a Saturday night residency at Sankeys, so if Defected are to reside at Sankeys for Ibiza 2015, it would have to be a new night for the popular house music label. Vincent is rumoured to be in the hunt for three big name DJ’s that he hopes to sign from more established venues like DC10, Amnesia and Pacha. In what has been a fight to establish Sankeys on the Ibiza scene, it is now been duly recognised as one of the big players on the island. Multi Award winning night Tribal Sessions has also announced that it will be returning to the popular Bossa club after a successful debut season. Viva Warriors, Cuff and Blase Boys Club are rumoured to be staying with Sankeys for Ibiza 2015.

At Ushuaia, which has become the islands premier EDM venue, not much is expected to change as the owners have plenty of cash reserves to throw at big artists on the EDM scene. Of last years new signings, Ushuaia would have been disappointed with Hardwells Tuesday residency but that was tempered by the good showing of Armin Van Buurens ASOT Thursday party. Both Hardwell and Buuren are expected to return. Guetta will be back along with the uber cool and underground Ants party. There are whispers of a new party for Fridays but we will have to wait a little longer before more is known about the event that may have links to the unsuccessful Hard Rock Ibiza venture. Over at Space nothing much is expected to change except for the ownership of the club in 2016. Ferry Corstens successful Full On party may change nights depending on what happens at Eden. At the end of last season, there were murmurings coming from the Richie Hawtin camp that he was not happy at Space. His Enter party had not performed as strongly as it did when it first opened with reports from a few good judges suggesting the party had lost some of its freshness. We will have to wait a little longer before we can call this one, but options are limited for Enter at this stage due to its scale and underground appeal. The popular gay friendly Supermartxé is also rumoured to be moving to Space from Privilege for a Friday night slot.

We will be blogging a separate report on the state of play at Booom and Privilege at a later date, but both reports will make interesting reading. The big question over in San Antonio is whether or not Eden will open again. Its image was further damaged by an ill-judged association with the Gatecrasher Brand that was more about finance than music. Eden’s Dutch owner paid over €12 million for the venue and unless he strikes oil under the club, it will be difficult to see how he can recoup his investment. We will be keeping our fingers crossed for Eden, as it was a stylish and friendly club when it was under Dutch management. Thankfully nothing ever changes at Es Paradis and it will celebrate its 40th Anniversary in 2015. Another momentum to dance music is Judge Jules and he is expected to continue his residency at Es Paradis for Ibiza 2015. While much of the above rumour is just speculation and gossip at present its gives an insight into what is happening on the island as clubs and promoters jockey for position. Normally its after the BPM festival that the real business gets done and contracts are signed for Ibiza 2015 so we will be keeping our ear to the ground as the stories develop.

Read the latest update here as Luciano rumoured for a brand new residency on Tuesday nights.