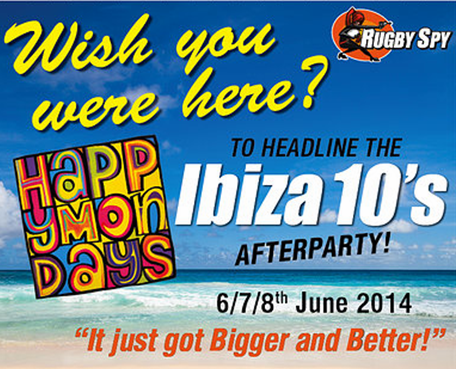 This event has been Cancelled 2/6/14.
An interesting sporting event planned for the second weekend of June in Ibiza, is the Rugby Spy Ibiza 10’s which will combine Rugby with a music party. It’s a novel three day tournament featuring 40 international teams all competing for a winners prize of £5000 stg spread across four categories; Mens, Womens, Vets and Elite Mens. The knockout tournament begins on June 6 with the first round games kicking off at 2pm and played into the evening under floodlights at the Can Misses football stadium in Ibiza town. There will be a carnival atmosphere at the event with DJ’s, big screens, food outlets, market stalls and Linekers Ibiza have come on board as a sponsor. The finals will be played on Sunday June 8 and the big music attraction is the live after party from The Happy Mondays. Tickets for the three day event are available at £45 each and Rugbyspy has laid on a number of activities and an opportunity for Rugby fans to explore the island while attending the tournament. The Ibiza 10’s is an interesting concept and one well worth checking out, especially if you are a fan of flowing and competitive Rugby. Full details on the tournament can be found by visiting the RugbySpy website EVENT CANCELLED 2/6/14