Before I delve into describing our Flower Power party at Pacha, I need to provide some context. I am a house music head, who used to frequent Ibiza before getting married and settling down. The nearest thing I get to a club these days, is downloading live Ibiza sets from You tube and bouncing around the kitchen as I cook our weekend treat meals. My other half has never been to a ‘real club’, tolerates dance music, but is much more at home listening to 70’s rock, sitting at a bar and sipping through the whisky list. However I have had this Ibiza itch that needed scratching for some time now, and thought in my wisdom, that it would be good for my hubby to do something completely out of his comfort zone to celebrate his 40th. Only after I booked our tickets, was the initial excitement replaced with a nervous anxiety…..what the hell was I thinking dragging him off to Ibiza for HIS birthday…. he will hate it!! So in order to lessen the potential impact, I vigorously explored what nights were on that could strike a happy medium and guided by the expertise of DannyKay, I decided that go with his recommendation and check out Flower Power at Pacha (which also happened to fall on the day of his 40th) and it was the perfect call!

We arrived at about 1am after a few drinks at Rock Bar and joined the long guest list queue, our friends who had tickets, went straight in…..15 minutes later we joined them. The place was heaving but not over crowded, a real mixed bag of people and different nationalities, French, Spanish, English and Argentinians we spoke to them all and everyone seemed to have only one thing in mind….. to have fun! Absent were the “too cool for Skool” types, nobody was hogging the space by the DJ booth doing their best impression of, flicking flies away from their face (historically a favourite position and dance move of mine) just pure (almost)  innocent fun, and dare I say frolics. The tunes ranged from soul, funk, rock and pop…. plucked from the 60’s, 70’s and 80’s  and absent of the cheese  present in those eras. All perfectly blended together by the original Pacha DJ Piti, against a background of decor, visuals and dancers in retro regalia including the original Martini girl who stood in a Martini glass whilst puffing away on a cigarette, a feast for the eyes that delighted my husband, who had never seen such a show. 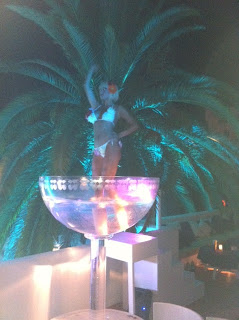 Bright colours of yellow, pink, blue and red, merged into one as we boogied the night away on the main dance floor, as well as getting our groove on in the funky room; all the while adorned with huge grins on our faces! The dress code, as usual with Ibiza, was anything goes, but as Pacha seems to demand a certain air of sophistication, be mindful that bare chests and shorts is probably not a good look. To get into the spirit of the party and to adorn something hippyish, I had a cream crochet dress with platforms and felt that I fitted right in. As I always is the case in Ibiza, it’s an expense night out, a glass of soda water alone was 11 euro’s, then add in ticket price, taxi’s etc its not cheap……but this is to be expected. However cost aside, if you want a flavour of where it all began and you just want a jolly good unpretentious night, without the cheese, then this party is for you! My husband, needless to say, not only is he an Ibiza convert, but he’s also found his dancing shoes, mission accomplished!! Happy Days!