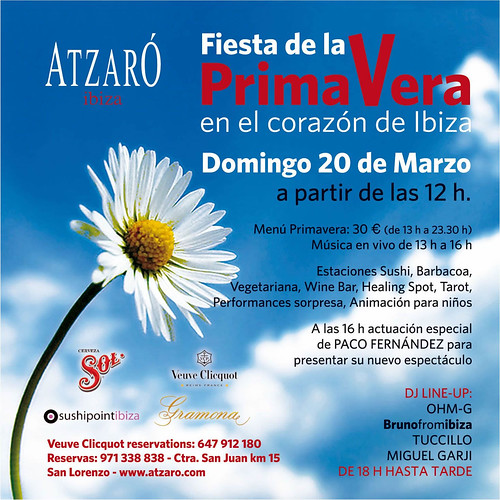 Ok its not a club, but the well know Atzaro Agrotourism Hotel in Sant Llorrenzo, will open its doors this Sunday the 20th March for its much anticipated opening party of 2011. Very much a local affair, the party attracts the local artistic community, that would be considered “hippy chic” rather than the more natural and less fragrant “organic” hippy.

The party signals the first real stirring of Spring in Ibiza, as the resident party community slowly begins to emerge from its winter hibernation. The Atzaro party is the first chance for the movers and shakers of Ibiza buisness to meet and greet and discuss buisness for the upcoming season less than two months away. New ideas are showcased and old friends are reunited or lamented. Its like a trade fair for local artists and people wanting to establish contacts and buisness opportunities for the season ahead.

This year the much respected Paco Fernandez will launch his new 2011 show which promises to be the highlight of the evening from 4pm. Afterwards, local DJ talent will keep the crowd buzzing well into the small hours of Monday morning.