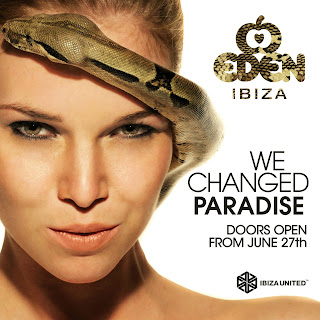 A Dutch team, with a fresh and vibrant purpose, are set to transform the old Eden venue in San Antonio, into a cool and contemporary new club. The Club was recently purchased by Michael van de Kuit, a Dutch entrepreneur who owns the Panama Club in Amsterdam. A regular visitor to Ibiza for many years, Van De Kuit, has a penchant for salvaging and transforming old buildings into new concepts. He has assembled a Dutch team to manage the Club, which will focus on underground, EDM and Techno music. The music will be aimed at the predominant English market that use San Antonio as a gateway to the island. “We appreciate that the English crowd are educated about their music, they know what they like and we hope to provide that for them in San Antonio without having to travel outside the resort. We will have A List DJ’s and a seven night schedule so there will also be room for new talent to showcase themselves. We will operate as a club only” commented Van De Kuit.

“Our vision is for a stylish club that will centre on providing good music and atmosphere. Like every club in Ibiza, there will be VIP areas but we will have an open door policy with our ticket prices averaging around €30 depending on the party”. Asked why the owners chose to retain the Eden name instead of a new one Michael stated “We did toy with the idea of changing it but we felt that Eden is an established name that is known internationally to many people. We are determined to raise the profile of the Eden name, so that it will become a much talked about club for good music in San Antonio.” There has been a steady increase over the last number of years in the footfall of Dutch clubbers coming to Ibiza. The local island community have certainly warmed to their friendly, mannerly and reserved personality. The Dutch dance scene has produced some big names in the world of electronic music and they are regarded musically as good mixers of different music styles.
The Dutch style will be a welcome addition to San Antonio, as the town is in need of another quality club. While not primarily focusing on A-List DJ’s the club hopes to have a balanced program of acts “Having Eden as one giant room instead of segmented rooms as it was for the last fifteen years, is a testament to the type of talent we’re going to be delivering on the stage. With the best and newest international line-ups every week, amazing theatre shows, a booming sound system and an interior that will transport people to a modern interpretation of the Garden of Eden” comments Van De Kuit. The grand re- opening party for the new Eden, is set for Thursday June 27th. It will be a glittering affair, as the island of Ibiza is introduced to a new garden of Eden. The club had become frayed around the edges in recent years and the new investment from Holland will hopefully breath fresh life into the club and establish it as a premier music venue for San Antonio. We wish the team at the new Eden, all the very best of luck for the season ahead and we look forward to checking out the new look club. Full line ups for the Eden 2013 will be released this week.