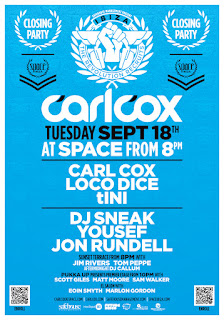 One of the most eagerly anticipated closing parties on the Ibiza Clubbing Calender each season, is the Carl Cox Closing Party at Space. This year has been another hugely successful season for Cox, who celebrated his 50th birthday at Space in July. It was a night to remember and one of the highlights of the season. A quality line up has just been announced for Cox’s Revolution Recruits Closing Party, with DJ Sneak, Loco Dice and Yousef, headlining the event. Joining them will be female techno artist tINI, John Rundell, Jim Rivers, Tom Peppe, DJ Callum, Scott Giles and Matt Moore. The Pukka Up crew will party with their own stage at the event with DJ’s Sam Walker, Eoin Smyth and Marlon Gordon, set to rock the Premier Etage.Tickets for the party are now on sale with www.clubtickets.com and
http://www.ibiza-spotlight.com/night/tickets_i.htm/?aid=186