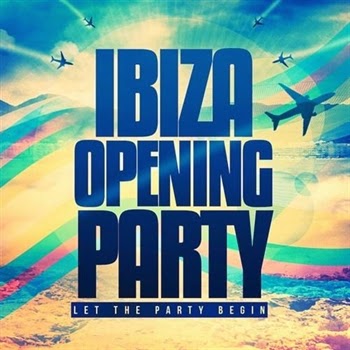 The Ibiza clubbing season is nearly upon us. It’s hard to believe that another party summer is just about to kick off on the white isle as it prepares itself for what many are expecting to be a good season. Playa Den Bossa is reporting healthy advance bookings and many in the resort are looking forward with anticipation to a good year. While San Antonio is slow, there is a much better feeling present about this summer than there was last year. There are a wide range of parties to choose from over a three week period and clubbers will be spoilt for choice as to which ones to attend. Many will have their own particular favorites and some parties have worked harder than others to attract the big names. In my opinion, an opening party line up is a big opportunity for a promoter or club to showcase its season. It sets a marker out that a venue means business and with word of mouth so important in marketing these days, clubbers need to be returning home with an exciting experience to tell their friends about. To be honest, there are only a few opening parties that excite the blog this summer; the majority are solid good parties but not many stand out in a showcase style. Below are the Top Ten that have put together Opening line up’s that I would like to go to. Will update with Part two tomorrow……. 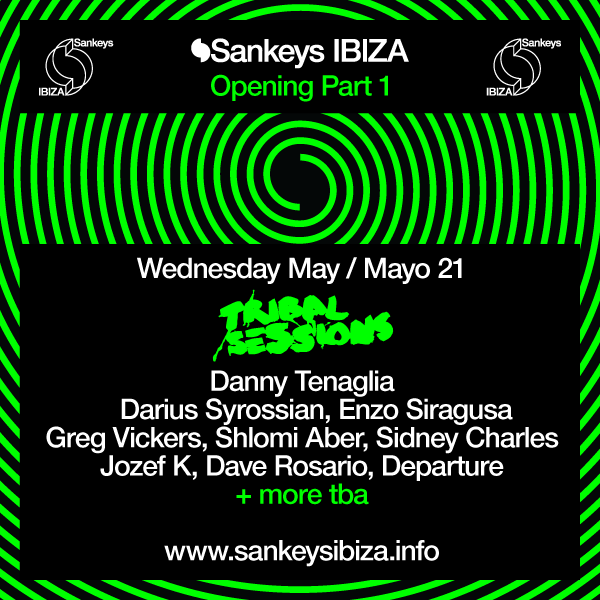 One thing you have to say about David Vincent, is that he knows how to put on a good party. The Sankeys Opening party featuring the Tribal Sessions crew, is the highlight of the Opening party season in Ibiza this year. The mouth watering prospect of a Danny Tenaglia set back to back with Greg Vickers, the original Tribal Sessions DJ, is enough to excite the senses. Throw in the rising star that is Darius Syrossian and the stylish Enzo Siragusa and you have a party that has the potential to go off big time. A lovely mix and balance of talent both young and old in a freestyle environment with a underground flavor to it – the Sankeys Tribal Sessions Opening party is my pick as the No1 Opening Party this season in Ibiza. Buy Tickets

A stellar line up of the finest underground talent in true Ibiza style. DC10 rarely fails to disappoint with its opening party each summer. What was once considered the after party to the famous Space Opening is now at the very least, equal if not better than the traditional Space Opening Fiesta. True the crowds don’t make for a pleasant experience but the buzzing atmosphere its creates sets the tone for the rest of the season. A bullet proof line up with names like Tania Vulcano, Mathais Tanzmaan, Dubfire, Timo Mass, Davide Squillance and Dan Ghenacia make the DC10 Opening party one of the best this season and one that everybody will want to be at. Buy Tickets 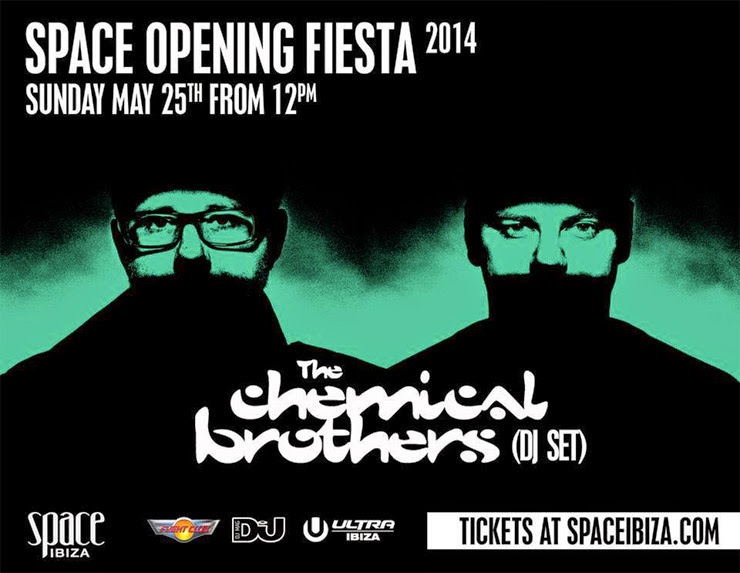 The elder statesman of Ibiza Opening parties and the daddy of them all. A huge line up over six areas featuring 35 different acts can easily have a clubber feeling confused and not knowing what they want. Space Opening has somewhat lost its unrivaled attraction mainly due to the absence of its ringmaster Carl Cox for the second year running. He was always the linchpin of the Space Opening Fiesta and his absence last year was very noticeable. The Stephen Gerard of Space, Cox drove and created the unique Space Opening atmosphere and in my experience, the party always brought out the best in Cox. Looking at this years line up, nothing excites with old acts like the Chems and Bassment Jaxx headlining. Deep Dish is the star attraction and if on song, they should tear up the Flight club. I have a sneaky suspicion that the sunset terrace is the place to be this time next week as Marco Loco has a potentially interesting room of guests. Space Opening is an Ibiza institution and long may it remain so. Buy Tickets

The highlight for me of the Pacha Opening party week. Ibiza has provided John Digweed with a new lease on life and some of his sets at Pacha last year were critically acclaimed. His stock has certainly risen but his talent has always been constant. His underrated and laid back style suits Ibiza and the island is really warming to his personality and technical skills behind the decks. The Insane opening party will also feature the current hot act in town which is the talented MK, duly reaping the rewards of many years of experience in the game. At the same party Pacha have secured the services of Dennis Ferrer and Tensnake. Throw in the legendary Pippi in the Global room and you have a line up of pure quality and experience that any respecting clubber would be foolish to miss out on. In only its second season on the island, Insane is leading the way for Pacha’s new direction. More of this and less of the commercial and Pacha should cement its place in Ibiza clubbing folklore. Buy Tickets

Last season at Amnesia, was one of the clubs most successful seasons with a great mix of parties. Musically it had some of the best line ups of summer 2013. Its opening party this year is a fine balance of quality tech and min tech acts form the likes of Adam Beyer, Maya Jane Coles and Joris Voorn in the main room, while Apollonia, Eats Everything and Mar T excite the crowds on the terrace. A traditional Ibiza curtain raiser and Amnesia have put together a line up that will please its loyal and faithful fan base. With a unique atmosphere and a great crowd, I am happy to report that the Amnesia Opening party is definitely one for the notebook next week. Buy Tickets

The debut Ibiza residency for the very popular 26 year old Dutch DJ. A huge following within the young 16-24 agegroup will ensure that the “I am Hardwell” residency at Ushuaia on Tuesdays, will be a very busy party. Production values at Ushuaia are the best on the island and this will lend itself to Hardwell’s style of music which always has his fans craving for more. A Hardwell gig is full of energy and Ibiza should love his show – its the type of party that Ibiza was made for. The “I Am Hardwell” party at Ushuaia opens on June 24 and expect some big name supporting acts like Martin Garrix to be announced over the coming weeks. Buy Tickets

A brand new location for one of the most popular Ibiza parties in recent years. The flagship party of the Vista Room at Privilege, Elrow moves to the larger and more expressive venue that is Space Nightclub in Playa Den Bossa. All the flair, flamboyance and energy of a Mediterranean summer is captured in this Spanish party that originated in Barcelona. A fiesta vibe and an atmosphere that you will not find anywhere else on this island, makes the Elrow Opening party at Space one for the notebook. As an added bonus this season, the Elrow party will also feature the underground and stylish Kehakuma party which is a technically savvy label with a near cult following on the island. The marriage of the two parties together may seem a little unusual but its typical of the cosmopolitan style that Ibiza is famous for. As this will be Elrows first Opening party at Space, you can be sure that all the stops will be pulled out to make it a memorable night. Buy Tickets 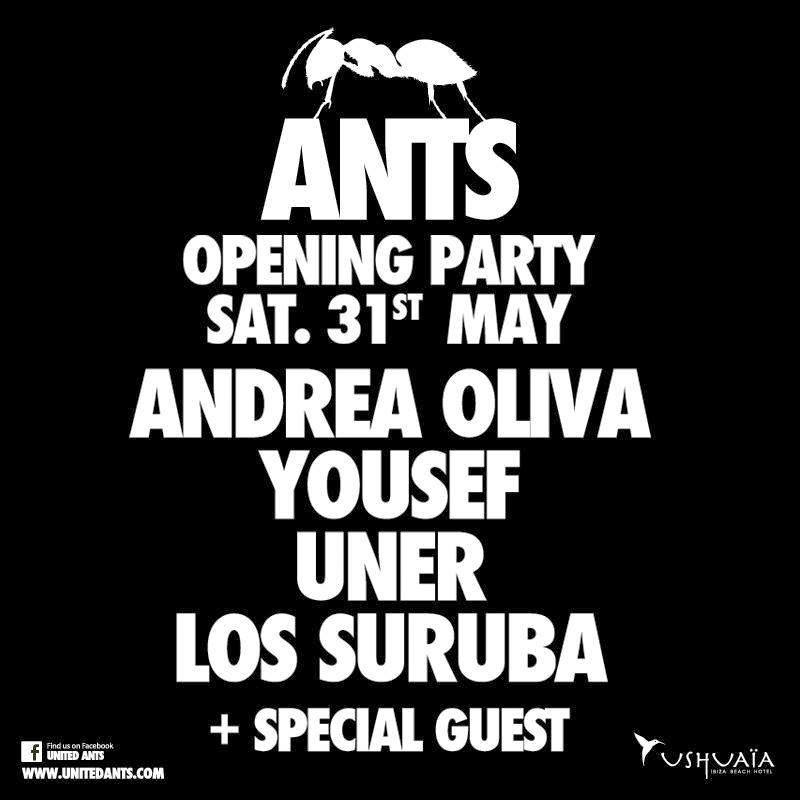 Last season’s most talked about underground party is back for what promises to be an exciting party of open air underground beats. A musically savvy and stylish mixed crowd who like their min tech, trance and EDM beats. The Opening party will feature the popular Andre Oliver, Yousef and Uner with more special guests to be announced. The Ants party is one of the few parties in Ibiza that goes off so early in the day – expect to find a full on, into it vibe around the pool at 3pm as the DJ booth is located near to Playa Den Bossa beach at the far end of the club. With a ticket price of just €30, The Ants Opening party is well worth checking out before clubbers head on to the Amnesia Opening party later that night. Buy Tickets 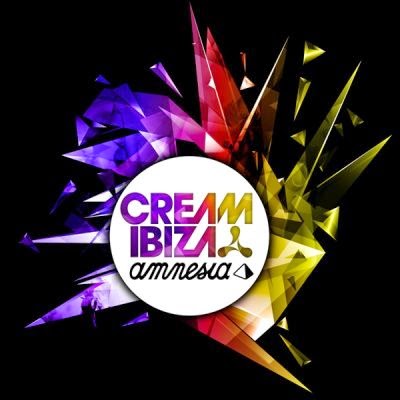 Celebrating 20 years on the island, Cream continues to create a unique atmosphere at the old hippy founded club in San Rafel. I would personally regard the Cream party as the islands premier Trance night and in the main room for its opening party, Paul Van Dyk will be supported by Aly and Fila. On the terrace, the very popular Calvin Harris is sure to have that room banging with his first Ibiza set of the summer. As always expect the place to be jammed but that is part and parcel of the special Cream vibe. Cream is now an Ibiza institution and to miss the party while holidaying in Ibiza is like going home without a suntan. Buy Tickets

Last seasons most popular party at Amnesia is back with Marco Carola conducting the mayhem with a crazy up for it Italian crowd there to have a good time and party. Carola’s legendary 6 hour sets are what special moments in Ibiza are made off. I would suspect that the Opening party will see Carola tearing up the decks in the main room with smoke rising from the amps as the sun lights up the main room at breakfast time on Saturday morning. If you are on the island in the first week of June be sure not to miss this party. Buy Tickets