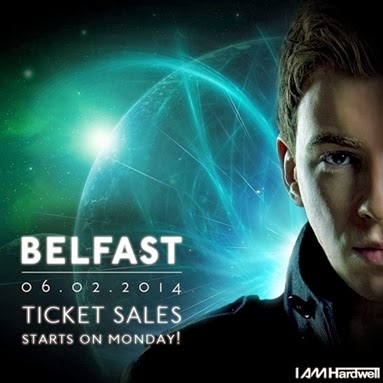 A “major incident” has been declared by the Northern Ireland Ambulance Service, at the Odyssey Arena in Belfast this evening, as a suspected bad batch of Ecstasy pills have affected a number of revelers. Over 50 people have been treated, with some taken to hospital, suffering from what a local newspaper is reporting as the, “ill effects of alcohol and drugs”. Young clubbers “at varying levels of consciousness” are being treated outside the Odyssey Arena where the Worlds No1 DJ, Hardwell, is playing to a sell out crowd. Rumoured to be booked for a summer residency at Ushuaia this season, Hardwell, is hugely popular with young audiences Worldwide. Belfast teenagers queued for days in the rain, to try and secure tickets for the over 16’s concert which sold out in hours. The concert is continuing inside the venue and there are also reports that the emergency may be an isolated incident. Adrian Doyle General Manager of the Odyssey arena stated in the last few moments that, “It is our understanding that a number of patrons arriving at the Odyssey to attend a concert by Dutch DJ act Hardwell, have required medical attention, having arrived intoxicated at the Odyssey complex. These patrons were not granted entry and were treated by the Ambulance service outside. Seven patients have now been transferred to hospital by Ambulance”. There are conflicting reports that patrons inside the venue, are being treated also, after overcrowding near the stage. People affected by this incident can contact a local hotline on 02890638131  for further information. A contaminated batch of Speckled Rolex pills were linked to the recent deaths of eight Belfast youths and local police had issued a warning to teenagers, to be extra vigilant for them. A picture showing bags of coke and pills, with a caption reading “Well Hardwell” was posted by a Teenager before the event. Later his father reported him to police and he was charged with possession of Class A drugs with intent to supply. The blog will update with any breaking news on this story.