My third year on the white isle and though we always planned to go to the artisan hippy market at Las Dalias ( one where the reps don’t take you) we never got round to it, until we saw that Wax Da Jam had moved their parties to this venue from the swish  Aura (now Sacca). With our base being Santa Eularia not San Antonio this time around it was a lot more accessible. After a short wander around the hippy stalls and a food pit-stop, we headed upstairs to the chilled dub vibes coming from the outdoor terrace called the Sky Lounge. A nice ambiance is created from the main man George Solar ( D.J from the cool Babylon Beach Bar in Santa Eularia) with his eclectic taste in cool down tempo beats. We take in a few drinks from the reasonably priced bar while the D.J’s for the night’s proceedings mingle with the crowd and relax. Around one o’clock we are told the party has started downstairs and asked if we would like to join; Of course, it’ll be rude not too.

On entry I feel the room is a bit dark and spacey, I would say more suited for a Techno night, not uplifting soul. A few people make their way to the dance floor where the faithful D.J Negghead warms us up with his quality cocktail of Reggae/dub and hip-hop. The drum warrior ‘Shovell’ dressed in what looks like a voodoo doctor attire (I’m told later he’s a practicing Shaman) looks cool but is out in the shadows. He awaits at his drums ready to unleash his legendary percussion skills while German Jazz drummer ‘ Wolfgang Haffner ‘ takes his position behind his kit. The main man of ‘ Nightmares on wax ‘ and curator of the nights entertainment ‘D.J E.A.S.E ( George Evelyn )’ takes over the D. J reins where he unleashes a set of unpredictable Funk ‘n ‘ soul delights which he is a true connoisseur of . That said a few familiar tunes I recognized, one being ‘Jungle Boogie’ by ‘Kool and the gang’ which did get the dance floor revelers throwing funky shapes while ‘Shovell’ & ‘Wolfgang’ play on furiously and keep the vibe tight and tribal. George gets us going more with a bit of M.C in between tracks , his mixing is seamless, warm and funky, throughout his set. Unfortunately we had to leave around 3am and missed the head -liners ‘Nikodemus’. 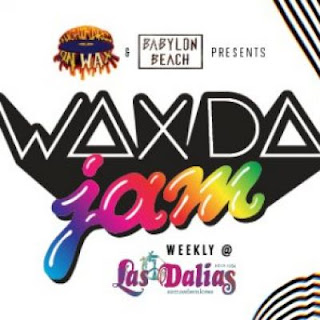 The organizers ( ‘Wax’ and ‘Babylon Beach’ ) have tried really hard, not slacking on quality tunes and line up, a real alternative from the big ego busting parties charging a right arm to see already planned sets. This party vibe is real, ready for anything and very laid back. Anyone looking to get over to another part of the island to make a night of it, wandering and taking in the cool hippy vibe of the market and fancy hearing some quality ‘Soulful’ tunes while not having to sell a kidney to buy a drink should head over. I respect the well established night doesn’t want to outstay their welcome using the same venue year after year,  this also being a step up to an all-nighter and although I enjoyed all the positive points I made, can’t help feeling a smaller, brighter, maybe outside venue would have suited the tunes more.
Words by Malcolm Parry.