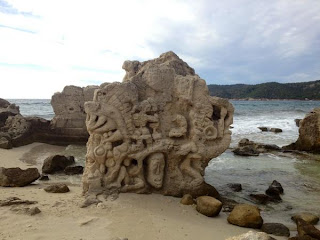 There is a place, a small natural cove hidden away along the western coast of Ibiza, that people come to celebrate the setting of the sun and dance to a primeval rhythm of deep base. Its a well kept secret in Ibiza, a special place that only a select few have access to. The small cove can only be reached by boat, as it is surrounded by high cliffs, sheer rock and covered in pine, camouflaged to the untrained eye. At the entrance to the cave, stands a 100 meter high arch that resembles a large cathedral chamber. To each side of the chamber are sculptures carved into the rock face of the cliff. They all face towards the sea, worshipping the sun like an ancient city lost in time. To this unique location sail a privileged few, who hold the Islands best kept secret close to their spirit. Celebrity or big name DJ’s are not welcome here, only people who seek to find the place have arrived.

I met with a 38 year old Swiss man, who had spent over 6 years searching for its location before he finally found his holy grail by chance last year. “Its like a real life version of the movie The Beach, where a group of backpackers stumble on a map with directions to a secret beach paradise….but the place in Ibiza has no map, no markers or signs its just there and has been for thousands of years, its that old. When I first heard about the place I considered it an urban myth, a story told around the camp fire to entertain wide eyed kids, but the person who told me was not a fantasy type of person. I had met him in University where we became good friends. He departed for travels around the world soon after we graduated and I had not seen him for over 8 years. I was told he was in Columbia but it was in Ibiza where I next met him and there we had one of those long Ibiza nights where time just did not seem to matter. It was over a sober coffee that he told me about the secret place and how he had found it both magical and spiritual and of ancient origin. In his opinion it was thousands of years old” 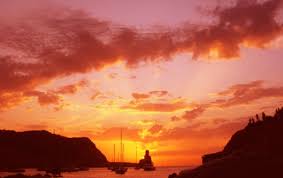 In Ibiza there are always these type of legends, The Orange Man, The Boy who never went home, Homers Sirens, Nostradamus, Es Vedra UFO’s, Cults, Ancient Orders, strange magnetic forces that restrict the use of GPS systems and of course, the lost City Of Atlantis. Ibiza is steeped in a culture, rich in story telling and the influence of many different civilisations who landed on the Islands shores. My meeting with the Swiss man was arranged by a close friend, a resident on the Island for over 40 years. For some reason he wanted to meet with me and as courtesy to my friend, I arranged to do so. “He just wants to tell you a story…. you may find interesting” my friend assured me as she gave me directions to where I was to meet him. “There could be a book in this for you” she smiled as she closed my car door.

As I walked into the local bar and restaurant located at a country crossroads, I immediately recognised my man. Swiss people have that relaxed, well groomed and quiet air of contentment about them that their similar looking German neighbours lack. We made eye contact and he stood up to greet me “Danny is it?” he asked as reached out his arm to shake my hand. “My name is Rob and I have been reading your blog…..I like it” Thank you I replied. “Well what can I do for you Rob, you have a story to tell me” I asked openly. Yes I do but first lets have a drink and talk, as he caught the eye of the waiter and ordered two beers.

After a while of exchanging pleasantries and getting to know each others background, he started to tell me his story. How his friend had told him about a special, secret cove in Ibiza, where, on full moon nights a group of friends would gather to play music, dance and re-energise their spirit in an place so powerful and full of raw energy that it would make the hairs on the back of your neck stand up. Three to Four people would arrive by boat in the afternoon to set up the sound equipment inside the caves at the base of the entrance. Nothing too powerful, as they did not want to draw attention to themselves but enough to play to about 70 people. The remainder of the group would arrive at a nearby tourist beach, park their cars and walk to the rocks where they were ferried by boat to the secret location. The boat did three return trips before everybody was in situ and ready for sunset. Most of the friends who returned each year would heartily welcome eachother before wandering off to gather their thoughts and experience those special sunset moments in solitude. As the sun set, nature around the cove became silent. They would spend about an hour or more in solitude before the music would start in tandem with the rising sounds of birds, wind and crickets in the nearby trees as the sun disappeared below the soft glowing horizon.

The base beats were almost tribal and raw, as the cave where everybody gathered, was an natural Amphitheatre, reverberating the sound into twisted shapes and effects. It was lit with candles so as not to attract attention. There were no drugs or alcohol at the party, just people coming together to dance and honour the energy that the location possessed. The music would build in intensity as the full moon rose higher in the starlit sky and it would not end until sunrise of the following morning. People would be then ferried by the one boat back to their cars parked at the nearby tourist beach and quietly blend back into modern Ibiza.

I had sat listing to his story without interruption for over 30 minutes. Not that I did not believe him, quiet the opposite, he had told his account in a calm and mater of fact manner, but I still needed to ask my own questions. I ordered another beer and asked why it had took him 6 years to find the place. “Well my Uni friend said people were sworn to secrecy, nobody could give directions or clues except to tell one suitable person that it was in Ibiza. A person then had to find the place by themselves, this was the only way. Many knew about the place but the full moon parties were organised impromptu and whoever was in the area just turned up on the night. I was told 8 was the smallest crowd and 60 the biggest”

My second question to Rob was why he was telling me about it. “Well it took me 6 years to find it with no leads whatsoever. I didnt live in Ibiza, so could only afford a weeks holiday there each summer. I would comb the west coast and try to keep my ears open on full moon nights but many times I stumbled across smaller hippy parties and they threw the sent. I was ready to give up when I read a piece in your blog, that triggered a memory, which then led to a walk and suddenly, there it was in front of me. I knew straight away. I rang my Uni Friend and he confirmed it and told me about the full moon parties. I now plant the seed in your head as it was your blog that helped me find the place, this is why I am telling you the story. Its up to you what you want to do with it”  With that Rob finished his drink, stood to shake my hand goodbye and said he was off to meet some friends. His parting words to me were “I hope to see you at the cave some day……you will find it before I did”

I sat in the bar and ordered another drink taking notes and trying to make sense of the last hour. It was a  Ripleys Believe it or Not story but for some strange reason it intrigued me. It was another of those special and weird Ibiza moments, that can occor when you least expect it on a magical Island in the Mediterranean sea. As I drove home I looked up into an Ibiza night sky, where a full moon was glowing bright and strong. I smiled.