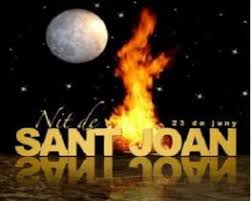 For the first time in its history,the annual festival of San Juan, in honour of Saint John the Baptist, will not feature the traditional lighting of the Bonfires or Fireworks this year. The local Council have decided, that due to the damage caused by the recent large Forest Fires, it would be best not to celebrate with fire, due to the sensitivities of local people affected by the blaze.

The Jumping of the Bonfires is considered a cleansing ritual by local Ibicencos. It signals the start of a new spiritual year, as past sins are burnt in the flames as a person jumps through the wood fires. When they emerge from the other side, they start the new year from a clean slate. Local tradition maintains, that the jumper then walks into the sea and makes a wish, that will come true later that year. The date also coincides with the summer solstice and the birth of John the Baptist, six months before Jesus at Christmas. In Ibiza the bonfires date back to pre Christian beliefs and the Greek gods Venus and Aphrodite, who are connected to local deity Tanit.

The Festival runs from the 23rd – 24th of June, with the Jumping of the Bonfires originally scheduled for the night of the 23rd. The Fiesta will still go ahead with live acts, music, traditional dancing and a fun party atmosphere with local charm and flair.