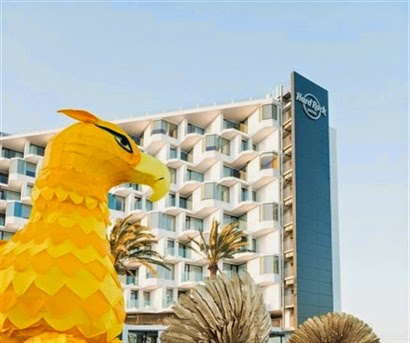 Hard Rock Hotel Ibiza, the latest addition to the Palladium Group of luxury hotels in Playa Den Bossa, is suffering from a deluge of bad reviews on TripAdvisor, the Worlds leading travel website. “Shocking”, “Unbelievably Terrible” and the “Worst Hotel Service Ever” are some of the headlines from English reviewers who have stayed at the Hotel which opened on May 18th last. However, a number of Spanish reviews paint a different story by contradicting the English ones with “Wonderful”, “Best Hotel in Ibiza” and “Incredible” taglines. A Spanish review praising the hotel with an excellent rating before the Hotel was opened to paying guests, was duly questioned by a fellow community traveler. A General Director of Hard Rock Ibiza responded to the reviewers query by stating “we have had guests staying at the hotel testing the rooms and services to be sure that when the hotel will be open everything will be ready”. Its not an ideal start for Ibiza’s largest 5* Hotel and like its smaller sister Hotel Ushuaia when it first opened, is suffering serious teething problems as it strains to meet clients demands under a new luxury brand.

Traditional Ibicenco Hospitality is world renowned and while the old Fiesta Group of  Hotels in Ibiza were not perfect, they did reflect a certain level of professionalism, quality and value for money. When the Fiesta Group was re-branded the Palladium Group by their owners the Matutes family with a business plan to modernise and upgrade its product, traditional values of Ibicenco hospitality seem to have been lost in translation. Impersonal and cold rather than warm and friendly, is what many people are commenting about Palladium Hotels in Ibiza. Its a different story in the Caribbean where Palladium Hotels offer a higher standard of service and product than the one available on their home island. While Hard Rock is aimed at a specific luxury market, one that is not Rock’n’Roll in the traditional sense of the term, it will need to address the golden rule of any successful hotel, good customer service. A language and cultural barrier is not helping but if guests are paying 5* prices they expect to receive service to match and cutting corners in this area will only spell trouble for its future. While past generations of Ibicencos were highly trained in the art of customer service, that tradition seems to be dying out as fewer choose the service industry as a profession.

Millions of euro has been invested into Hard Rock Ibiza but it is still mutton dressed as lamb. The hotel was built in the 70’s and certain structural aspects could not be changed. The ugly supporting pillars that block views, the thin walls and mass concrete layout cannot be disguised and trying to sell Hard Rock Ibiza as a true 5* product, will take all of the Matutes Groups considerable skill and experience in the trade to accomplish. Is it a step too far for Ibiza’s most powerful family? Only time and peoples personal experience with the Hotel will tell. With the advent of TripAdvisor the customer has become the most important marketing tool for any Hotel. In Ibiza TripAdvisor has been a huge help to the smaller hotels, who before the online revolution had to rely on tour operators to fill their rooms. Hard Rock Ibiza now has a hard task ahead to convince the public that it does care about traditional Ibicenco hospitality, will address the teething problems and establish a Hotel that Ibiza can be proud of. While Hard Rock Ibiza is still clearly a work in progress it certainly deserves a chance to do so.