Manumission to Cinemission for Ibiza 2013

Strong rumours are beginning to emerge on the island of Ibiza, that one half of the infamous Manumission partnership, Mike McKay and Claire Davies, are about to make a triumphant return at Ibiza’s newest Club, Bomba. Posters displaying the slogan “Manumission is Dead, Viva Cinemission” have started to appear around the island advertising the new party. In the pipeline for over two years, the Cinemission concept, a Manumission spin-off, had originally been linked to Pacha with a 2013 tour scheduled for “Pacha venues Worldwide climaxing with a magnificent Ibiza homecoming”. That statement first appeared on the Cinemission website but has since been removed as the concept now seems to be heading to rival, Giuseppe Cipriani’s Bomba club, which only recently received its licence to open. Pacha has confirmed that it will have no association with Cinemission this season, while Danny Whittle manager of Bomba, has indicated that Friday nights may be the preferred slot for a party that is sure to draw a lot of attention. Interestingly, it was Pacha, that the McKay brothers first wanted to hold Manumission at, but the club could just offer a monthly party. Ku was the only club to offer a viable weekly slot and the rest is now history.

Mike and Claire were accepted as the more creative and adventurous half of the Manumission team, that first took place in Ibiza at the Coco Loco bar at Ku nightclub (now privilege) in 1994. Its concept was born in January of that year, when brothers Andy and Mike McKay, along with Dawn Hindle, first launched the 12 series party at the Equinox village in Manchester. When the party moved to Ibiza for the summer, Claire Davies, came on board working as a promoter. In 1995, after a kiss at the Space afterparty, Mike and Claire embarked on a torrid relationship, which reached its sexual zenith during the infamous Manumission live sex shows, which were performed on stage in front of 10,000 people until 1998. The first sex show did not feature Mike, it was Claire and a Dutch porn star named Renata. Their private parties at the subsequent Manumission Motel, were legendary. Soon after Ibiza Rocks was launched at Privilege in 2006, the McKay brothers went their separate ways. A split then emerged with neither side having much contact with each other. Always the more business focused, Andy and Dawn went on to build the very successful Ibiza Rocks party which set the trend for others to follow with its open air, evening party concept. In an interview with the blog last year, Andy stated that the Manumission concept was, “still alive but shelved for now. If and when the time is right I would be happy to see Manumission return”. 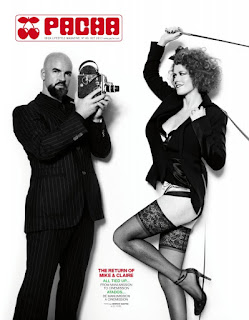 While the Cinemission marketing campaign may be flirting with the old Manumission brand, it is very unlikely that the party will ever see the light of day again. It would need both the McKay brothers to agree on a format and with the recent “Manumission is Dead” headline appearing, that door of opportunity seems to remain firmly closed. An active social media campaign for Cinemission has started on Twitter as they recruit dancers and promote the party at Bomba. No date has been given for the Opening party of Cinemission mainly due to the fact that Bomba has not announced when it will be in a position to open. The signing of the Cinemission party from Pacha, will be seen as a coup for Bomba and welcome news for Danny Whittle as he continues to battle against the tide, to have the club open as soon as possible this summer. Work has yet to begin on site and a “late June” opening date is presently the target. The blog will update on this story once more news comes to hand but for now, Bomba, looks set to host one of the most exciting and anticipated parties for 2013, in partnership with one of the islands most colourful and intriguing couples. UPDATE 12/7/13 THIS PARTY IS NOT HAPPENING read more here
UPDATE 20/11/13 Manumission Return A Step Closer read more here