Luciano links up with Cipriani Brand. 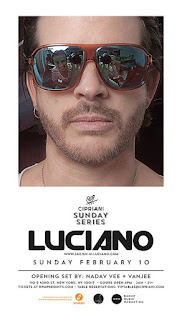 In what was a big pointer towards the residency options of Luciano in Ibiza this summer, the Swiss born DJ was recently associated with the Cipriani chain of sophisticated restaurants. On February 10th last, Luciano, was booked to play a Sunday Sessions gig at the 42nd Street, New York outlet, of Capriani’s International brand of luxury restaurants. The gig was cancelled due to snow blizzards which closed JFK airport. Interestingly, the press release for the event, contained the first outing for Danny Whittle as a Capriani agent. He stated “This party isn’t about LED walls and confetti cannons, it’s just about the music. Great music. We wanted to bring the world’s best DJs to one of the most beautiful venues in the world, and couldn’t be more excited to kick off the Sunday Series with Luciano.” After much speculation, its the first official confirmation that the ex Pacha man, is now working for the Cipriani stable, who are set to open a brand new club called La Bomba, in Ibiza this summer.

Whittles association with Luciano is strong, after he guided Lucianos name, from an underground DJ at DC10, into an International brand at Pacha. After the New York press statement, its clear that the Luciano/Whittle collaboration is alive and well and that a Sunday night slot at La Bomba, to reflect last seasons Sunday Cadenza party at Pacha, is the likely favourite for a Luciano residency in Ibiza this summer. It is also expected that Luciano, will once again, link up with the powerful Ushuaia brand and continue his Thursday residency at the open air, day time venue. A rumour that Luciano will play, We Love, seems unlikely, as its also on a Sunday and would mean that Luciano would play three different parties in one week. While its not impossible, it just does not seem to fit with Lucianos current marketing image.

If the above speculation proves correct and Luciano and Cadenza go with a Sunday night slot at La Bomba, then the prospect of a head to head with Solomun, who is also rumoured to be playing Sundays at nearby Pacha, is possible. If the rumours are well founded, then we may have a mouth watering clash of the titans,”El Clásico” style to look forward to. Like two warships from the Mary Rose era, a broadside volley of electronic beats will be unleashed, as the two flagships sail by each other on the same stretch of water. It will be a pivotal battle for both sides and one that may determine, the outcome of a commercial war, that could turn out to be a prolonged campaign. Luciano, has already fired a warning shot of intent, with his statement that, to make an omelette you have to “break a few eggs”. Ibiza 2013, has all the hallmarks of a classic season not to be missed. It promises to be one the most exciting tickets of the summer and we strongly advise, that a ring side seat is secured. If you ever thought about, when would a good time to go to Ibiza, then book your ticket now, because this summer is it.