For me, there are few constants in Ibiza, people and places that remain consistent and true as the years pass by. One of those places is Cafe Mambo, on the sunset strip of San Antonio, a welcoming house of Mediterranean style, with an understated touch of cool professionalism. First opened in 1994, by Navarro Basque businessman, Javier Anadon, it was originally a collection of four small houses that stood next to a building that was home to some noted bohemian artists of the 60’s. Javier was 23 years old when he first came to Ibiza with his Scottish girlfriend who he had met in Benidorm. With a marketing degree under his arm and a British partner, the pair set about building their Balearic dream. Their first bar was Bucaneros in the Bay, which became the launching pad for a chain of popular bars and restaurants – the jewel being Cafe Mambo. Now with a new generation of the Anadon family ready to make their mark on the family business, Javier Anadon is proud and happy to talk about his vision for San Antonio and what makes Cafe Mambo “the most famous sunset in the world”. 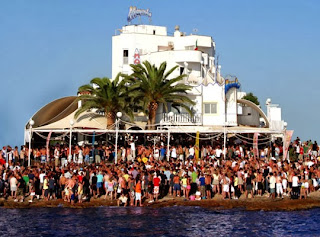 My first question to Javier is why he came to Ibiza. “I came with my then girlfriend now wife in 1976 looking for work. I was the Black sheep of a family of four and I loved to travel. I started working in Nitos in the West End which back then, was the best thing in Ibiza – it was unbelievable and everybody came to experience it. A beautiful area of vibrant bars and music, full of Spanish, British, Dutch and a lot of Swedish people, a great mix with artistic and bohemian quarters”. It was surprising to hear that the West End had started out life as a much different place so I was keen to know when it started to change. “The power of the package tourist model changed things and when Pepe Rosello left Play to build Space in 88, San Antonio lost somebody important. I love San Antonio very much, it has been special to me and my family. I want to bring back the good days when the town was full of artists and culture, times that people do not talk about now. For me Ibiza is always Bohemian, always hippy and charming. I have been very lucky here and Ibiza is my home”. It was that luck that saw Javier pick the perfect time for the establishment of Cafe Mambo in San Antonio.

It was 1994 and a wind of change was blowing through the island. The iconic trance track, Cafe Del Mar by Energy 52, had burst onto the dance music scene in Europe and flashed images of the island to a new generation of traveller. An unusual video for its time, it subtly captured the essence of Ibiza with shots of the sea, rocks, fisherman huts, boats, the red earth of the country side, old fincas and windmills, along with interior shots of the Cafe Del Mar bar designed by Catalan artist Luis Guell. It was a musical postcard from Ibiza to the world which became intrigued as a tall, shaven headed DJ carrying a silver flight case and wearing sunglasses, a crombie coat and leather shoes, roamed the island on an unknown quest. Cafe Mambo launched in 1994, the same year as Manumission and a year after Cafe Del Mar was released. “It was Stuart Cochran, a character everybody knew as “Scooby” who gave me the idea for Cafe Mambo” smiles Javier. “We were looking for a name and when somebody suggested Mambo, I knew straight away that was it, as it reflected the “Mambo style” of music. I love Cuba and the name just sounded right, so Cafe Mambo was born. One of the first big DJ’s to play for us was Haceinda DJ, Graeme Park. He was one of the biggest DJ’s at the time and wanted to play at Mambo. Soon lots of DJ’s wanted to play here and I began to see clearly the concept and worked hard to market it” recalls Javier. “Jason Bye was another who helped build our name and in 1995 it exploded, as Roger Sanchez and Pete Tong became part of the Mambo family. The Radio 1 Weekend for me is very special and Roger and Pete are more than just great DJ’s – they are our friends.” It is this close bond of genuine friendship and hospitality, created by the Anadon family that endears Cafe Mambo to so many.

In the mid nineties as dance music and DJ’s became more mainstream, Cafe Mambo was in the right place at the right time. The success of the Cafe Del Mar video brought TV crews and a large British crowd to the sunset strip to witness its famous sunsets, played out to a unique chilled soundtrack, pioneered by Jose Padilla. “I was very lucky to capture that moment with some great people, many from Britain who became our good friends returning year after year. The British people that come to Ibiza are some of my favourite as they bring style, are very polite and welcome quality product and service – for me they are one of the best people for Cafe Mambo”. Javier then tells me of his love for London and his plans to open a Cafe Mambo outlet there in the next three years. “I really want to open a London Cafe Mambo but it is important that we first find a good partner that understands London like we do Ibiza. I have many friends there and it is our Number 1 project for expansion. Tapas, cocktails and good music…..that is my dream for London. If we find the right people we will invest in the city”. I then ask Javier about other future plans for the Cafe Mambo brand. “We are looking at a Cafe Mambo Hotel for San Antonio and maybe a boutique hotel in the countryside. We are also developing our very popular Cafe Mambo Heirbas. Many countries and people want to sell it for us, but we are very careful about quality control so we will take it slowly, to ensure that it is done in the right way…the Cafe Mambo way”.

At 60 years of age Javier Anadon does not plan to retire any time soon. “I would like to retire at 91 but slowly I will start to work less and they will work more” as Javier turns to his son Christian, who joins us at the table. Christian, with a lilt of his mothers Scottish accent in his voice, is one half of the future of Cafe Mambo along with his brother Alan. Both Mambo Brothers are Ibicenco, born and raised on the island and responsible for carrying on the Cafe Mambo tradition founded by their father. I have witnessed both of them grow up and thankfully, they possess the natural Ibicenco charm and intelligence to safely protect the Cafe Mambo name. “Its very important for the future direction of Ibiza that the island works together 100%.” states Javier “Ibiza is about the music, the beaches and the nice hotels – to care now is important. Ibiza is one of the top places in the World and with so much money on the island, now is the time to plan its future. It must come from a sense of Ibiza, the people of the island must drive it”. I then ask Javier what is the essence of Mambo and Ibiza. “For me the essence of Cafe Mambo is Ibicenco hospitality, and looking after every single person. The essence of Ibiza is simply the magic of the place”. Next year Cafe Mambo will celebrate its 20th Anniversary and the surprises they have in store are rightly ambitious. For Javier Anadon, a man who prefers to be in the background rather than the limelight, the occasion is sure to bring him a great deal of pride and satisfaction. I for one will be there to raise a toast to the man, who is and always will be, the good Mambo King.