“We’re lost in music, feel so alive, I quit my nine to five” is the chorus to Sister Sledges funky soul classic, Lost In Music, which was written by Nile Rodgers and Bernard Edwards. It encapsulates much of what Ibiza is about – music, expression and freedom. It was released over thirty three years ago and still sounds as good now, as it did when it was first pressed onto vinyl in 1979. I have always considered that era of American soul to be dance musics renaissance period, talented artists and songwriters that came together to create a perfect storm of classic melodies and vocals that continue to influence modern music today. It was pure, natural talent that rose to the top – only the cream got the opportunity to record. Elvis had just left the building but his legacy was deep rooted into the musical matrix of what was happening in America at the time. My admiration for the people that were part of that renaissance, from Buddy Holly to Aretha Franklin and the Disco era was huge. Imagine my excitement, as I sat across a table from a star of that golden era, a person whose voice is still considered by her peers to be one of the best in the world. Last year Oprah magazine rated her voice in the Top four from a list of 50 great female artists of all time. This is my interview with the beautifully talented and demure, Kathy Sledge.

I was a guest of the DJ Awards, an organisation born of Ibiza in 1998 and whose aim it is to recognise and promote the talents of electronic music. It may have its critics, but its core values are intentionally good which makes the DJ Awards still relevant in Ibiza today. Any body or organisation that promotes music, deserves respect for doing so. The people involved with the DJ Awards, work hard to ensure that the press are looked after well and we were afforded plenty of time to talk to the nominated artists. Of all the big names recognised, there was just one that I wanted to interview and that was Kathy Sledge. When I first saw her, she stood out from the crowd. Smiling and laughing and part of her surroundings, not apart from it, unlike some of the big electronic egos that were present. She was in the company of Lenny Krarup, who along with Jose Pascual, had originally conceived the DJ awards, but in a different guise. Lenny would be one of the islands most colourful and interesting personalities. I had first met him back in 2006 when I worked with a Swedish TV company, and at the time Lenny was involved with the famous Mancini family, responsible for writing and composing Moon River, The Pink Panther theme and countless other film and television scores. Since my last encounter with Lenny, he had parted company with the DJ Awards after a disagreement over its direction, so I was surprised to see him at the event, but I should have guessed he had something to do with Kathys presence.

Lenny, a multi-platinum selling artist, is presently one part of a new musical collaboration called, The Aristofreeks – the other part being Max Martire, a DJ at Space and Amnesia during its halcyon, open air terrace days. Max tells me of his time at Space and Amnesia where it was always about the music and never the DJ’s. “You were paid very little if at all, in the early nineties” laughs Max. “Musically its a mess out there, its all nonsense music and Ibiza has changed a lot. We want to deliver something real and bring quality back”. Both men would know the real Ibiza well and understand what it stands for musically. Max explains what Aristofreeks is about. “We take classic tracks from the 70’s and we make new versions of legendary songs. We want Disco house to return”. Their first signing was Kathy Sledge and along with legendary Jerry Greenberg, formed Pacific Electronic Music to promote their sound. It’s an exciting concept and one that is welcoming back the true greats of music to influence the industry with some perspective and direction at a time when things have gone a little stale. My first question to Kathy is how did the collaboration with Aristofreeks begin. “When I first started in the industry at 16, Gerry Greenberg, was president of Atlantic Records and he put us in touch with each other. He always kept saying to me back then, that I should do more solo stuff. I had been talking to Gerry about a Billie Holiday project and he felt the Aristofreeks direction would be good for everybody. When I first heard the remix of We Are Family I just said, wow, that sounds just what the record would sound like if it was released today…. they kept the integrity of the song intact but with an Ibiza undertone”. I then ask Kathy about the current music scene “What you have to remember is that to some people and markets, We Are Family is new. I always say that when music is timeless, when its really really good, it never goes away, it always comes back. When I was recording with the sisters, voices and artists were uniquely distinctive. Today its all about the acrobats – how they can run and jump around, instead of vocal style. Much of the music today is pop and trend driven”

My next question to Kathy regards Ibiza and her connection to it.”I first came here with Roger Sanchez in 95 and worked with him on a chart topping dance track called Another Star which was a Stevie Wonder cover. Ibiza was a totally different town back then….it has changed a lot. In America, if you are anyway associated with electronic music you know all about Ibiza but I was introduced to the island more so when I associated with Aristofreeks. We have recorded in Beverly Hills but we also record in Ibiza and I much prefer to work here. We invested into a high end Ibiza studio that will create the analogue wave for our real disco sound. Nile Rogers will be recording a track with me in the style of Daft Punk, but in a funky disco way and Im looking forward to that. I really get to use my voice and I am excited about sharing its nuances as its a passion to me.” I then ask Kathy about Nile Rodgers and his influence on her career “When Nile wrote We Are Family we recorded that track in one take and this is why….. I wasn’t allowed to hear it until it was time to sing it. I was a kid and I kept asking, “can I hear it can I learn it” and Nile would go “no….. just trust me, when you sing it you will get it” and to this day I think that approach created the magic of that song”. I then ask what makes Nile Rogers special, “Nile is great at instilling confidence. Sometimes Niall comes across as shy and insecure but he exudes confidence. I remember as a goofy kid bugging him about if our records would get played and Nile would always reassure me with his words of “sweetheart trust me…. its going to be fine, its going to be massive”. Kathy reflects for a moment, as if she is re-living those special days. “I cant leave out Bernard Edwards either, he was so good to me and I miss him a lot. Bernard and Nile were intense together, they knew exactly what they wanted. While I was recording Greatest Dancer in one studio, they were writing I Want Your Love in another. When they were in the zone the energy they created was powerful and I was honoured to be part of it.” We Are Family and Greatest Dancer were Sister Sledges two Number One hits in America and both were written by Edwards and Rodgers who were masters at guitar and bass line arrangements. Sadly, Bernard Edwards died of pneumonia in 1996, while performing a Chic reunion gig in Japan. Nile Rogers had this to say about Kathy Sledge “she has one of the most unique and original voices in music. Always has and always will” 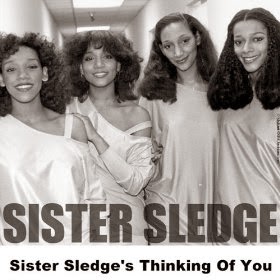 We are now chatting freely and with the obligatory promotion work completed, I ask Kathy about the music that is special to her “Of all my songs with the sisters, Thinking Of You, means the most to me. I love to sing Thinking Of You, I love the ad-lib of Thinking Of You – its magic to me and I love it more than any other song”. Max agrees and adds that he has over 250 versions of the song taken from the original. What does the future hold for Kathy Sledge? “We are working hard on the new album together – we have six songs already. I am a workaholic and I like to work fast. Lenny and Max have written a song for me called, Thank You and its a classic, funky house track. I’m looking forward to recording some really strong songs with the label. For me, it all starts with a good song. If you take care of yourself, love what you do and honestly keep your heart good, then there is always a future for your voice”. Kathy next tells me about a pet project that she will be doing “Its a Jazz project with PEM and Stanley Clarke, a tribute to Billie Holiday called, Brighter Side Of Day. I am also involved with an Aristofreeks Pink Panther project for next year, with some surprises from Henry Mancinis back catalogue. Sexy dance remixes where I get to sing in a Shirley Bassey/Amy Winehouse style. I have lots of new ideas and its great to work with people like Aristofreeks as the energy with them is good and that’s what I remember from working with Nile and Bernard”.

We continue to chat about Ibiza, club politics and music and before long, my ten minute slot becomes thirty. I have taken up a lot of Kathy’s time, but when you get a chance to meet one of your musical hero’s you don’t want it to end. As we depart and say our goodbyes, she whispers to me in her smooth and sexy Philly voice that she will dedicate an acapella track to me if one gets included on the new album, such was my instance during our chat that she records one. As a granddaughter of an Opera singer and with roots in Gospel, an acapella is only natural in my opinion. I am truly smitten. A real professional, a lady and for me a legendary voice and talent that can only be good for Ibiza and the music industry in general. Lets hope this is the beginning of a new trend of music and Ibiza will once again lead the way for others to follow. A back to basics approach where the music and most importantly its quality, is promoted. Its time for something different, a new direction where variety and talent comes to the fore once again. Later that evening after a powerful live performance of We Are Family at The DJ Awards ceremony in Pacha, Kathy leaves me with the prophetic words ” I think the timing is perfect for what we are doing”.

The Blog would like to thank Aida Guerrero of the DJ Awards, for her kind assistance and help with the above interview.