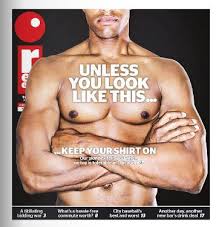 The town council of San Antonio in Ibiza, has decided to introduce a new by law, that stipulates the necessity for all persons to cover bare torsos when not on a beach. Shirtless men and women, will no longer be allowed to roam the streets of the town no matter how hot it becomes. The law was introduced by the new PP Town Mayor, whose party promised reform in this area during the recent election campaign, which saw a big swing back to the right of Ibiza politics.

It may be a case of the new brush sweeping clean, but the ban clearly sounds like an election gimmick or publicity stunt. Its a silly law and it seems that the new legislation was not thought out very well, as it’s bound to create more trouble than its worth. To the many tourists that visit San Antonio each year, it is primarily a tourist resort, a place where they are on Holiday, relaxing and enjoying the sunshine. Taking off ones shirt is not a sign of disrespect, but a way to deal with temperatures they are not used to dealing with back home. It would be like London banning the use of rain macs in December because the city didn’t like the look of them. San Antonio can not expect to have its cake and eat it too. Its either a tourist resort or its not.

Local police resources are going to be stretched even further to enforce a unworkable law. A group of  bare chested lads on holiday, full of alcohol and in full voice at 4am in the morning will not be an easy job for the local police to enforce. Combine that scenario with drunken exuberance, police with guns, the obvious language barriers and it promises to be an interesting situation. This new law is bound to rank up high in the World rankings of Silly Laws so lets hope that its all just a publicity stunt.