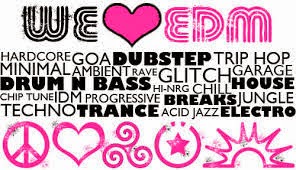 While last year had fashionable elements of Base, this summer its EDM that’s taking center stage. Rather that moving away from it, most of the genres are infusing elements of EDM to appeal to its mass market especially the younger one. That said, EDM is moving in an underground direction also. All the Ibiza clubs, except for DC10, are playing it. While Trance never really took off in Ibiza, this year it has arrived, mainly thanks to Armin Van Buuren and his ASOT show which is moving Trance towards EDM. Other Trance DJ’s like Ferry Corsten and Markus Shultz, are also flirting with a new sound and the kids seem to like it. An example of this crossover would be Armin’s Ping Pong track (listed below) which is proving an unlikely hit. Pacha has embraced the sound of Steve Aoki and his Playhouse party has become a big hit for them. Even Sankeys is employing a mainstream DJ like Duke Dumont. One of the reasons for the big success of Cream at Amnesia is its ability to combine a popular sound into its parties. Ushuaia the top venue on the island, devotes 75% of its program to EDM.

No one underground track has emerged as a clear front runner for tune of the summer and maybe that is a reason why EDM seems to be in control. As we pass the half way mark of the season, only Maceo Plex’s Conjure Balearia can be put forward as a true quality track that has successfully captured the sound of Ibiza 2014. The only track that comes close to it is Patrick Toppings Forget.  Its still not too late for another rough diamond to be unearthed, as it was at last years Closing parties that Conjure Balearia first came to light. The min/deep tech sound remains strong and steady and is still the trendy underground sound on the island. Enter and Cocoon go head to head as leaders in this genre with DC10 right up there with them but less commercial. The Ants party at Ushuaia has its own unique, experimental sound which leans towards the DC10 model. Jamie Jones is thankfully keeping it real at DC10 with Appelonia and The Boiler Room parties also been mentioned in dispatches.

The real sound of Ibiza will always be deep house and house inspired music and there are signs of green shoots in this genre, as young labels like Lucky Life are introducing us to a new wave of talent. Their small label which was launched in June with DJ’s like Khubu and Ben Fhurst who have already appeared alongside Carl Cox at Space. With most of the clubs centering on EDM, min and deep tech, the sound of Balearic House is sadly been forgotten this summer. I would have to think hard to find a party that is solely Balearic house – Danny Tenaglia at Tribal, some rooms at We Love and Hed Kandi at Es Paradis come closest  In years past Eric Morillo and Carl Cox would have been the leading figures in this genre but Cox is catering to a wide audience these days. Lets hope some promoter on the island will give us a pure Balearic House party next season as old timers like myself need to dance too. Hopefully Jose Padilla, who is rumoured for a new residency at an iconic venue, will revert back to his roots and play less of the modern and more of the music that made him famous.

On the live music front Ibiza Rocks is in a different league. I don’t know what to call the rubbish they are serving up at Hard Rock Hotel. Apart from acts like Placebo and The Prodigy, much of their programming only serves Ibiza in a bad light. Hard Rock Hotel is trying to dress a hippy in a suit with attitude – that style will never fit in Ibiza. More of Ibiza Rocks and less of Hard Rock Hotel please. There are of course many smaller venues dotted all around the island that nobody ever hears of that play excellent live music. Las Dalias is one, Raco Verd is another along with Il Chirincana on Cala Martina beach. These type of establishments deserve the most respect as they are doing it for the love of the music, not the money. They happily entertain thousands every year for free. Well that’s about it for a roundup of the season so far in Ibiza, hope you enjoyed reading it. Always remember, music is a personal experience and Ibiza allows one to discover their favorite music as it offers such a diverse range of genres. Don’t be led by what the industry or the media dictates – discover your own style. The journey finding it is much more enjoyable and rewarding as music will always have the answer.

Some of the sounds of Ibiza 2014 so far. Leading the way is Conjure Balearia

Alesso is hammering this track at Departures and is a good example of how EDM is progressing.

Patrick Toppings Forget. And finally a small flavour of a different side of Ibiza. Dunia by Tchando.