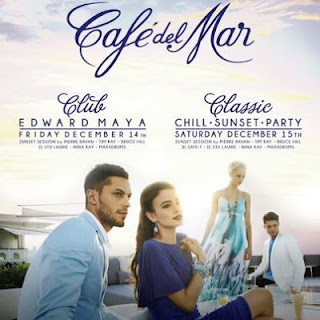 Cafe Del Mar Ibiza, the iconic sunset venue, located in San Antonio, has distanced itself from recent reports in business journals, that it is to open a franchise in Dubai. Only last week, a spokesman for the company that was to open the new Cafe Del Mar franchise, on a beachside location in the debt ridden Middle Eastern city of Dubai, stated  “We are very excited to welcome the iconic Café del Mar brand to the Middle East at Meydan Beach.The brand is a natural fit for both our location and the target clientele for our Chillout Lounge which is one of the most glamorous beach-side locations in the Middle East.” However this evening on Twitter, Cafe Del Mar tweeted… “A non-authorized Café Del Mar is apparently going to open Friday 14th Dec at Meydan Beach in Dubai. It has nothing to do with us…It is being opened without our authorization.”

The denial by Cafe Del Mar, that it is not associated with the Dubai franchise, comes four days after news of the new business venture, first hit the headlines. A company of the stature of the Meydan Group, is unlikely to publicly announce a collaboration with any business, unless it had prior contractual permission to do so. Therefore it would suggest, that the miscommunication problem, may rest with the middleman, the so called “master franchiser” for Cafe Del Mar in Asia and the Middle East, Utopia. Its CEO Umesh Amarnani, was included in the press release for the new venture. The messy affair will not help the image of Cafe Del Mar or Meydan and it is most certain, that we will hear a lot more about this story in the near future.

Update 13/12/12 Meydan Group issues following statement today, in reply to Cafe Del Mar denial tweet “Meydan Beach, through its entertainment partner Viva Entertainment FZE, has contracted with the United Arab Emirates registered owner of the Café Del Mar brand to provide the full Café Del Mar experience at the Chill Out Lounge at Meydan Beach. Café Del Mar at Meydan Beach is set to be one of Dubai’s premier Chill Out Lounge experiences and we very much look forward to the official opening on December 14th and 15th.”

The above press release was then followed by a facebook post from Cafe Del Mar which stated; “CAFÉ DEL MAR of Ibiza never authorized nor supported such operations. Dubai based company called Utopia, defining itself “Master franchisor for Café del mar in ASIA”, claims to have given the authorization to Meydan, but no valid agreement exists between the Café del Mar organization and Utopia. We want to inform that these actions are out of any kind of control, supervision and musical direction of Café del Mar Ibiza and they have never been sanctioned by Café del Mar Ibiza.

It now looks increasingly likely, that the middleman, Umesh Amarnani of Utopia, may have sold Meydan a pig in a poke, or, he is being set up as the fall guy for the whole mess.