Finally, after many, many, long months, weeks and days of frustration, setbacks and blunders, the club that was christened as Bomba, will open its doors tonight. The man responsible for delivering the product at Bomba, Danny Whittle, will be praying for everything to go to plan and that the roof (metaphorically) will be blown off. No doubt the place will be packed, as curious clubbers, press and certain factions of the industry lend their support. Powerful friends of the Cipriani network will also be in attendance. Questions still remain to be answered and to put it mildly, like the Ibiza Rocktronic festival, its been a PR and communications disaster, with blunder after blunder, compounding its chances of survival in the dog eat dog market that is Ibiza. Sadly for Bomba, those problems are not going to disappear, as it sets sail on a leaking boat filled with expensive cargo but held together it seems, with sticky tape. It will be all hands to the pump tonight just as it has been for the last number of weeks.

The initial licencing problem was one of Bomba’s own making. The premises was always considered a no go area, as it had been shut down for good reasons in 2008 (a new law was introduced to close it). Local residents didn’t want it there and a well established local club called Pacha, understandably considered it their patch, so any threat would be met with competitive vigour. The golden rule in Ibiza is not to upset your neighbours a mantra that a similar venue trying to open in Northern Ibiza at present, is learning to its cost. Like a poker player feeling they had the percentages in their favour, Bomba was a little over confident in thinking that a licence could easily be won in a matter of months. Nothing in Ibiza is that straight forward and there never seemed to be any contingency plan. The identity of the Hacker who devilishly re-directed the Bomba website to Pacha, is rumoured to be known to Bomba. While some industry figures pointed the finger at Pacha, it would not be Pacha’s style to steal somebody’s else’s name. Internal difficulties and squabbles, along with names of fashionable London clubs and energy drinks, are current rumours doing the rounds in what has been a highly charged season, provoked by a poorly judged article in the New York Times. 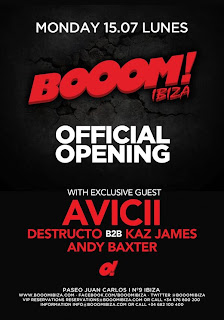 Rumours about the ownership of the Booom name, are now surfacing, as another big Ibiza party are making claims that they own it. How well founded these rumours are and if they will affect the new club should transpire over the coming weeks. The party claiming to own the Booom name is a Spanish party, so it might not want to sell the rights, if they own it. Already the Booom Twitter page has introduced the 0! logo on its tweets. The whole affair has been a mess with one well known Ibiza hack calling it “The most unsuccessful club launch in the islands history”. Can Bomba recover from such a horrible start?….one would like to think so because its market concept has a future in Ibiza. While Bomba may like to play to the general clubber its the VIP market that will determine its success. Bomba’s owner Italian Giuseppe Cipriani, is a much liked and admired figure within those circles and his style would lend itself to Ibiza in a good way. A racing car driver with a cool and professional F3 team named after the island, he has a penchant for fashionable styles and service. Cipriani’s style like Nikki Beach, Ushuaia, Pacha and Destino would be a welcome addition to the future economic health of Ibiza. Whereas the people behind Nikki Beach did things the right way, Bomba to date has not and they really need to change their game plan before its too late. We wish them the best of luck tonight and hopefully they can hang in there.