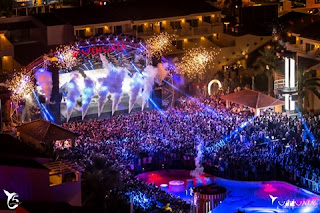 We sent our intrepid reporter Lorna Murphy to check out if Avivii was still doing the business at Ushuaia this summer. Below is her report of the party.
The ability to have intimate music experiences that feature many of the best and brightest stars of the electronic music industry is one of the things that I love about Ibiza so much. The other day I was looking at the line up for this year’s Creamfields festival and in mind I was mentally checking off the artists I have already seen while on the island this season. Where else will you get to hear Avicii, one of the biggest influencers of the electronic music industry of the past decade play outdoors in the sun in intimate surroundings such as Ushuaia Ibiza?. On a Sunday, Ushuaia in Playa d’en Bossa, is Avicii’s domain. This evening’s lineup brought a sense of excitement and intrigue, Cazzette a Swedish duo whom I had never heard of before, Ruby Rose, she of OITNB Netflix fame making her Ushuaia debut and one of my favourite artists German DJ/producer Zedd.
Early in the evening the Swedish duo Cazzette played in the sun and provided a gentle warm up to the evening’s entertainment which for me at this stage has become quite tiresome. There seems to exist some kind of protocol regarding an artists’ set time and the type of music they play. Cazzette’s set was nice but nothing truly exciting. They dropped tracks by Pep and Rash (Red Roses), Duke Dumont (Won’t Look Back) and a lot of their own productions (Sleepless). They finished off their set by playing the crowd a new track of theirs entitled ‘Genius’ for which they were filming the music video in Ibiza this week. Following next was Ruby Rose, Connected Artists newest addition to their agency roster. I, along with a few other people I spoke to were quite intrigued to see what the Australian had to offer. It was clear Ruby Rose was visibly in awe of the crowd that had gathered for her debut Ushuaia performance. She only received a short 45 min slot but she made the most of every second playing a varied selection of music including ‘On My Way’ (Axwell Ingrosso), ‘Wish you Were Mine’ (Philip George), ‘Make me Feel Better’ (Alex Adair) and a remix by Don Diablo of Blonde’s track ‘All Cried Out’. Her performance was popular with the crowd as it was relevant but there was a splash old skool dance in the form of ‘Praise You’ by Fatboy Slim which you know will always going to go down well with an Ibiza crowd.
The next artist to grace the DJ booth before Avicii was one I would have to admit I was looking forward to just a little bit more than I was Avicii’s set. Zedd’s music just makes me feel happy, it has such depth, stunning tones and is packed full of melody and emotion. Zedd opened his set with a track from his new album ‘True Colors’ and one of my favourite tracks ‘Beautiful Now’ featuring Jon Bellion Check it out here: Zedd favoured many vocal tracks throughout his set such as Clean Bandit’s ‘Rather Be’ featuring the vocals of the stunning Jess Glynne and one of his own tracks ‘Follow you Down’ featuring Bright Lights. Switching gears mid way through the set Zedd dropped some deeper, darker, heavier sounds and stripped down some tracks by Showtek (Booyah), Jauz (Feel the Volume) and Lil John (Drink) and made his own unique mash up that got ever person in the crowd jumping. Zedd closed out a stellar performance with his own remix of Empire of the Sun’s track ‘Alive’ which was apt as the crowd were truly alive and ready for more.
Just after 10pm, recessed back to the rear of the stage behind a sloping LED wall spitting out colourful abstract images Avicii stood in the DJ booth and surveyed all before him, thousands of happy faces as his opening track ‘Waiting for Love’ came pouring out of the speakers. Unlike other artists who tend to shy away from playing a very high percentage of their own productions Avicii’s set was filled with hit after hit such as ‘Addicted to You’, ‘I Could Be the One’, ‘Hey Brother’ and many others.
Avicii’s ability to mix the old and the new came in the form of Etta James’ iconic song ‘Something’s Got a Hold on Me’ mashed with ‘Levels’ midway through his two hour set. Towards the end of his set Avicii treated the crowd to some unreleased music from his forthcoming studio album, ‘Stories’ which gives us an insight into the sound of his new music. His music is always filled with lots of soul and the new music we heard was set to a slightly slower tempo but with a structured, strong baseline.  Recent reports indicate that we may even hear vocals from Avicii himself on his new album following the in footsteps of other producers such as NERVO and Calvin Harris who have all featured vocally on their own productions. As the midnight hour approached and our time together was almost over Avicii upped the tempo to finish off yet another night of his residency in true flamboyant, spectacular Swedish style.

Words by Lorna Murphy. A big thank you to all the team at Ushuaia for their kind hospitality.