Ibiza – The Next Generation. 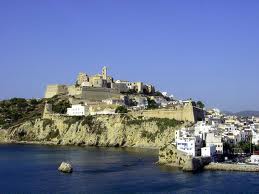 As we humans, hurtle towards a third Christian millennium, the small in size, but big in heart, Island of Ibiza remains constant. From the early indigenous inhabitants, who pre-dated the Phonecians, the Islands first civilized settlers by at least two thousand years, man has walked the pine covered hills and sands of this powerful rocky outcrop. It has always attracted people of singularity…. progressive minds free from conformity. The first inhabitants of Ibiza, lived naturally, in caves along the western coast of the Island. They were not involved in the hospitality business, preferring to forage the land and worship its powerful conduits of energy, linked to the moon and sun. It was the Phonecians that built the first hotels, establishing trade and opening up the Island to the then modern traveller, equipped with the latest sail boats and high end fashion. In fact, Ibiza, was the Paris of its day for trade in fashionable clothing, as it harvested the highly prized Tyrian purple dye, that was painfully extracted from the Murex rock snail, found in plentiful supply along the coastline of the Island.  The dye was worn as a fashionable status symbol by antiguan celebrities and Royalty. It was the Bling and Gucci of its day and fetched its weight in silver, as it took over 12000 shellfish to produce 1.5 grammes of pure dye. The Phonecians were the purveyors of fashionable items, like an ice cream van to a child, they were openly welcomed by various civilisations, as they sailed the seas trading their exotic wares. Ever since that time, Ibiza has been attracting a high end and wealthy tourist, drawn to Islands unique style of hospitality.

Its a style of hospitality, trained, skilled and grounded in the natural personality of its people. Friendly and open to all, it respects integrity, trust and friendship welcoming the stranger into its home without prejudice. It does not like arrogant, loud and selfish people and will distance itself from their company. It enjoys different cultures and is inquisitive to learn more about them, adopting styles it likes. A talented communicator, it can converse in over five languages with an unobtrusive delivery. It values time, family and good company and enjoys the moment to its fullest. Even in this greedy and commercial corporate society, its has remained true to its identity. One has only to look to the real people of Ibiza, the Ibicencos, to find its warm, natural and easy style. This style of hospitality has fundamentally remained unchanged down through the centuries, instead evolving and adapting to the environment around it. This character trait that helped its people survive the warring factions that conquered the Island in the name of some God or King. Their blood was spared, as their service was always valued as a useful skill to the incumbent military forces. Service that easily recognised good food  and wine, preparing dishes to reflect the best qualities of its natural ingredients, while providing a merry time with a soft bed or companion to warm it.

Over the last five decades, a generation of Ibicencos have worked in the service industry, as there were no Universities on the Island. If an ambitious Ibicenco wanted a job outside of the Hospitality industry, then they would have to leave home for the mainland, were a higher level of education and culture awaited them. It was the new wave of free thinking Americans and Europeans, that arrived on the Island in the sixties, (some call them hippies), making it home and raising their children as part of the Islands culture, that were the first to send their young, adolescent offspring away to further their education and schooling. The local Ibicencos, who grew up with many of these new residents, soon yearned for similar adventure and left to join them. What this new wave of “extrangeros” brought to the Island of Ibiza in the 60’s, was a realisation of the importance of education, to the development of the person. The original school, that was set up by the new wave of families in 1973 in the Morna Valley, to educate these kids at a primary stage, was full of some of the most gifted and free thinking teachers in the World. Artists and writers, teaching in a creative environment,  free of curriculum boundaries (it taught pottery and Chinese Calligraphy as some of its subjects). They instilled into their students a different way of thinking and learning. I will return to the Morna Valley school, a kind of Hogwarts of its time, at some later stage as it deserves a book of its own, but for now, lets keep to the point of this blog.

Its the children of that generation, now in their mid to late thirties, that have started to return to their birthplace to settle and raise their own families. Many are well rounded individuals, who have travelled the World and experienced life in all its different aspects and cultures. Combined with a technically savvy, astute and better educated Ibicenco, they are now becoming the driving force and influence behind the Islands new development of its tourist industry. The English and German promoters, who had more or less, free reign to develop the clubbing market during the nineties and noughties, are now being overtaken by a local and indigenous movement, that look set to imprint and deliver their style of Ibiza on the Island. Places like Aura, Nagai, Marfil, Cafe Mambo, Florencio, Orosol, Migjorn, BHS, Ushuaia, Privilege, Space and Pacha are starting to reflect that new, self confident and hard working generation that is rising on the Island. There are many more places that I have failed to mention but most people living in Ibiza know where they are. Culturally the people of Ibiza are very much the same, all raised with the Islands most likeable traits instilled into them from an early stage. Politically and socially though, is where those natural similarities come to an abrupt end.

From my observations and experience, there are four main social groups in Ibiza. The people who come from families that pre-dated the Catalan invasion, they are referred to as the real locals. Not easily recognised by the average tourist, the majority still live in the farming countryside. Then there are the Catalans, who arrived on the Island in the twelfth century, they have been part of the Islands culture for over ten generations. Next are the Spanish and then the ex-pats and original wave of Americans/Europeans that arrived in the late 60’s. The Locals and Catalans would be strongly Roman Catholic and control the political and administrative functions of the Island. In this group, you would have a right wing, wealthy, powerful and conservative body, along with a more central, liberal and socialist body of people, mainly the ones without all the money. There are storm clouds developing between these two bodies at present, as one sees the other as having too much power that they use for their own self interests and gain. Years of perceived corruption by this right wing body, is now surfacing as their Achilles heel. Both bodies are pro business, but the one in the centre, the majority, wants to conduct it in a more sustainable, fairer and equal way, while the other wants to hold on to its control, afraid to loose it to the growing populous of liberal and modern thinking on the Island. The Spanish group work by themselves, easily interacting with the two bodies within the main group. They do not get involved in politics, have stylish villas in the best areas and have always done quiet well for themselves. The ex-pats, 60’s new wave, and non Spanish Residents, want the Island to remain the same way as they found it when they first arrived. A nirvana of sorts. A cheap and easy way to live in a clean, natural, environment, free from corporate tourism. They hate the tourist development more than the locals, as they see it as further destruction of their dream retirement home and a drain on dwindling natural resources. Many would be eco-friendly but posses no political  influence (not that they would want it anyway) and the more vocal ones, are seen as an irritant, that have to put up with for PR and business purposes. If these people took the time to understand the local culture and do things the right way, they would probably have a lot more success. In fact the ones that were clever enough to recognise this, the Charlie Chesters, Danny Whittles and Andy McKays, were the ones that did well for themselves, acting as a bridge between the different cultures.

If the current economic crisis in Europe continues to socialise the debt and privatise and protect the profits of the wealthy elite, then Ibiza is heading for an uncertain future. The whole VIP industry and the way it conducts its business, in a selfish and greedy manner, is starting to leave a bad taste in the mouths of the ordainery citizens of Ibiza, who are having to work harder to make ends meet. Many of the smaller traditional bar and restaurant businesses are falling victim to the growing All Inclusive business models of the big hotels. They cannot access finance to change their business model, as no lending by the banks, bureaucracy and restrictive laws from Majorca, hinder their progress. The proposed development of natural lands by powerful interests wanting to build concrete homes and five star hotels, is not going down well either. The current licencing laws, where some are more equal than others in they way they can interpret them, is another issue that is causing unrest. It is in this climate, that Ibiza’s new generation is trying to make a name for itself. Unless something gives soon, there may be challenging times ahead. Ibiza can not go on like this for ever. There is an old teaching, that a person should only take as much as they need to comfortably survive on. At present some people in Ibiza are gorging at the trough, as others struggle to exist on the crumbs that fall from the table. As a  practical logic is part of an Ibicencos outlook on life, they must now realise, that if the current situation is allowed to continue, it will not have a happy ending. It is time for the old to pass on the business to the youth and allow them, to develop the future of the Island in a way they see fit in retaining the true essence and style of Ibiza Hospitality for generations to come. In my opinion, they are well capable of doing so. One side has already passed on the mantle to the next generation, the other now needs to catch up and break through. Early signs suggest, that they are beginning to do so.